Raccoons[1] are a race of plump creatures found on Isle Delfino in Super Mario Sunshine. Only three ever make an appearance, making the species one of the least populous on the island.

Their race is based on the Japanese raccoon dog, known in Japanese as the tanuki. The design of Raccoons in Super Mario Sunshine is inspired by tanuki statues seen across Japan; the sun hat, shirt/coat, tail, and sash are all trademarks of the statues. 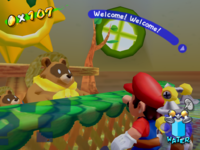 In Super Mario Sunshine, the Boathouse in Delfino Plaza is run by two Raccoons, a father and his son. Ten Blue Coins can be traded there in exchange for one Shine Sprite. The father only accepts Blue Coins in increments of ten, and if Mario tries to ask for a Shine Sprite for less than ten Blue Coins, the father exclaims that he cannot sell the Shine Sprites at such a low price. Additionally, another Raccoon owns a small rowboat shack in Noki Bay. According to a sign near the shop, the boats can be rented for 90,000 coins, though after Mario uncorks the waterfall, the owner states that he is allowed to use them for free.

The father's voice clips are provided by Scott Burns.[2]

A Raccoon in Minecraft

In the Super Mario Mash-up in Minecraft, Wandering Traders are replaced by Raccoons.