“Welcome to the sun-drenched tropical paradise of Isle Delfino! We're so pleased to welcome you to our beautiful home! Come enjoy a natural wonderland to which we've added the world's finest resort facilities, a spectacular amusement park, and succulent seafood! This and more await you on Isle Delfino! Come relax and let us refresh your body and spirit.”
—Pianta, Super Mario Sunshine

Isle Delfino is a tropical paradise island and vacation resort inhabited by Piantas, Nokis, Yoshis, Sunflower Kids, and Raccoons. Alongside the smaller Pinna Island, it resembles a dolphin, as indicated by its name, which means "dolphin" in Italian. This is a reference to the Nintendo GameCube's preproduction code name, Project Dolphin. Isle Delfino is the main setting of Super Mario Sunshine, and has since reappeared in many spin-offs, including the Mario Kart series. 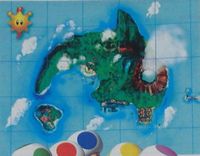 A map of Isle Delfino from the South Korean manual for Super Mario Sunshine.

Mario, Peach, Toadsworth and some Toads take a trip to Isle Delfino in Super Mario Sunshine. However, the island had been covered in graffiti by the mysterious Shadow Mario, who the people think is Mario. With the help of the water pack FLUDD, Mario is forced to get rid of all the paint on the island and clear his name by defeating the imposter that has been causing trouble. Shadow Mario turns out to be Bowser Jr., who soon kidnaps Peach, but after Mario defeats him and his father, Bowser, life on the island returns to normal and Mario, Peach and their friends enjoy the rest of their stay on Isle Delfino.

Isle Delfino has appeared in five of the Mario Kart games with new courses and stages based on it.

Locations on Isle Delfino are shown in a couple of Mario Party minigames. Mario Power Tennis includes both the Delfino Plaza Court and the Gooper Blooper Court, which is set in Ricco Harbor. 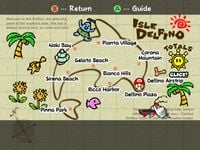 A map of Isle Delfino as seen in Super Mario Sunshine, on which is displayed all major locations on the island that can be visited by Mario.

Isle Delfino and the other islands surrounding it. 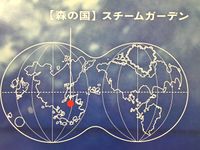