Not to be confused with Bianco Square.

Delfino Square is the second race course of the Flower Cup in Mario Kart DS. It is inspired by Delfino Plaza from Super Mario Sunshine.

The race takes place in part of a plaza and the pier. The major feature of the track is the drawbridge before the end of the course connecting the pier and the plaza. The bridge rises and lowers periodically during the race. Piantas cheer the racers in many sites along the track, and in Mario Kart DS, they make noises that add to the music when the player is nearby.

Delfino Square reappears in Mario Kart Wii as the third course of the Banana Cup. 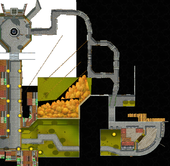 An overhead view of Delfino Square

The track starts with a straight road, leading racers to a turn around a fountain. The track then runs along a narrow and bifurcated alley with some Item Boxes. Once past the alley, players cross a stone bridge and reach a pier with some crates serving as obstacles. If a racer crashes into one at high speed, it will break up, often revealing a Mushroom or a Banana peel. After the players drive along the pier and around a sharp corner, there is a short straight section of road, before a lifting bridge, covered in Dash Panels, which allows players to gain more speed, even in midair. The track then leads the racers back to the straight street, where the finish line is found after driving through a small wooded green zone of the town.

Delfino Square contains two main shortcuts the player can perform. The first shortcut is located right before crossing the stone bridge. Turning off to the lawn and the tree, a racer can jump and land to a wooden dock near the pier, shaving off a few seconds. It can be done more easily with the help of a Mushroom or a Star. The second shortcut is found in the pier ahead the corner. Hidden by a pair of crates, a narrow alley covered in dirt grants racers a slight advantage over their opponent. This shortcut requires a speed booster to run efficiently over the mud. However, if careless, players may end up falling into the water awaiting on the other side.

Delfino Square returns as the third course of the Banana Cup in Mario Kart Wii. The course has received slight visual upgrades, though otherwise it has mostly remained unchanged. Buildings now have 3D textures, the shortcut that skips the stone bridge can now be accomplished without the use of an item, and the area the shortcut is located no longer appears on the map of the course. There are also more Pianta spectators. Depending on the items a player has, they can chain the jump from the first shortcut into the muddy alley of the second one. It is also now possible to perform a trick on the draw bridge as it is rising.