“Hey, do you see the jumbo juicer on top of this hut? That's how we make our special juice smoothies.”
—Pianta, Super Mario Sunshine 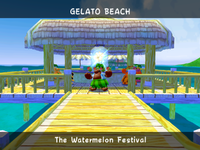 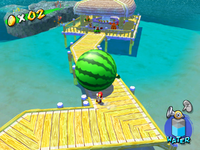 The Surf Cabana, also referred to as the Watermelon Shack,[1] is a small seaside bar located on the west side of Gelato Beach in Super Mario Sunshine. It is unique as it is built over the water parallel to the shoreline, with a small yellow zigzag dock leading the way up to it from the shore. Its main function appears to be making juice smoothies for the denizens of Gelato Beach. It features two tables with chairs and umbrellas behind the main hut, a circular counter with fresh coconut smoothies and a large juicer, which, for unknown reasons, is accessed via the roof, and will damage Mario if he touches it. The juicer leads to a glass container inside the hut, which has a Shine Sprite trapped inside.

The Surf Cabana appears in every episode of Gelato Beach, but not much attention is really paid to it until the final episode, "The Watermelon Festival." In this episode, Mario must carefully roll the largest watermelon found on the beach to the Surf Cabana while carefully avoiding Cataquacks, which will fling any watermelons into the air on sight, destroying them instantly. When Mario finally gets the watermelon to the Surf Cabana, he must carefully roll it down the zigzag dock to the hut's entrance, where it will be juiced to make smoothies, and the trapped Shine Sprite will be released for Mario to collect.