Spike Bars are spiky obstacles encountered chiefly in Super Mario games. They are similar to Fire Bars, but with spiked balls in place of fireballs. They usually can be destroyed with certain power-up forms, whereas Fire Bars are completely indestructible. If characters come in contact with a Spike Bar, they take damage.

In Wario Land: Shake It!, Spike Bars, referred to as spike poles[1] or spiky poles,[2] appear in levels that feature Rocket Buckets, such as Airytale Castle and Launchpad Labyrinth. They extend out of a metallic pivot and start rotating around it the moment Wario mounts a Rocket Bucket, retracting when the vehicle is destroyed or abandoned. Spike poles appear with varying lengths, are indestructible, and are always surrounded with coins, collectable by carefully navigating in-between the bars. If Wario flies a Rocket Bucket into a spike pole, the vehicle breaks, forcing Wario to plummet to solid ground. Since they only appear when a Rocket Bucket is in use, spike poles cannot hurt Wario directly.

Contrary to Fire Bars, which mostly appear in lava-themed levels, Spike Bars are found in a variety of level themes throughout Super Mario 3D Land. One or two Spike Bars can be found rotating around the same axis, but unlike Fire Bars, Spike Bars never rotate on their side.

Objects similar to Spike Bars, known as spiked rollers,[3] also appear. They automatically roll back and forth along the ground, though they are occasionally swung by chains, giving them vertical movement.

If Mario or Luigi make contact with a Spike Bar or spiked roller in their Statue forms, it breaks and releases several coins.

A spiked roller thrown by a Spike in Spike's Lost City

Spikes attack by producing spiked rollers and throwing them forward, which roll down the path in front of them. All spiked roller varieties can be destroyed by characters if they assume an invincible state, which includes the Lucky Cat, Invincible, White Tanooki, or White Cat forms.

In Super Mario 3D World + Bowser's Fury, Cat Spikes throw spiked rollers identically to normal Spikes during the "So Close Yet So Far" mission of Trickity Tower. After this mission is completed, if Mario leaves the area and returns, the Cat Spikes will permanently disappear from the area. 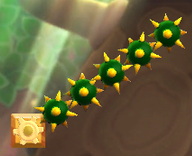 Spike Bars return in Super Mario Run as obstacles in the level Spike Bar Jungle, and are designed to look closer to their original appearance from Super Mario 3D Land, but with extra spikes. This is its only appearance where the bar is connected to a Hard Block with a cog. Albeit indestructible in this game, Spike Bars can be bounced on safely by Yoshis.

Spiked rollers appear in Captain Toad: Treasure Tracker and its Nintendo Switch and Nintendo 3DS ports, once again thrown by Spike, although only in the level Windup Stairs.

A spiked roller can be found at Underwater Village, a location in Spooky Trails from Mario + Rabbids Kingdom Battle. It is stuck between some plants grown away from the main path. Beep-0 notes that whoever owned the spiked roller left the area quickly, claiming this to be "an ominous sign". The weapons Spike Strike and Big Spike are designed after spiked rollers, though their description refers to them as Skewers.

In Mario Tennis Aces, Spike produces a spiked roller and uses it to hit the tennis ball in his Special Shot.

In Paper Mario: The Origami King, some spiked rollers can be seen in the Spike's quarters alongside some Spike Balls in Bowser's Castle.