Soggybog River is the fourth level in the Jiggle Jungle in the game Wario Land: Shake It!

Soggybog River is a swamp-like area filled with brown and murky water. Rope vines from Ropey Jungle also make another reappearance here. Logs provide as platforms to allow Wario to cross the water. Many Turkeyjerks and Venus Guytraps of both varieties are located here, as well as Boomdineros and Scarracudas, so careful steps must be taken to avoid taking damage. Swift rivers make it impossible for Wario to swim forward. As Wario enters the jungle, he needs to use ropes to swing over the river, climb on vines to reach higher places, jump on Venus Guytraps for more coins, and step on floating logs to reach the bank. The golden enemy is a Bandinero that is easy to capture. When Wario finds the caged Merfle, he needs to use the Max Fastosity Dasherator below to run across the water and back to the start. 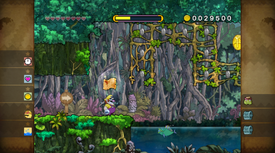 There is a Secret Map located here, which leads to Riverbloat Rapids. It is located in the fourth section with many rope vines and Scarracudas. Before Wario jumps onto the vines, he must stand at the bank and perform an Earthshake Punch. 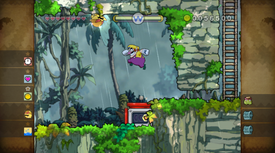