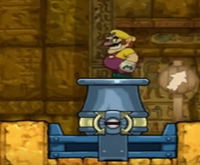 Wario on top of a Blast-O-Cannon

Blast-O-Cannons[1] are objects in Wario Land: Shake It! that can be used to blast Wario in a certain direction and break through hard blocks. While Wario is inside a Blast-O-Cannon, the player can tilt the

to adjust the angle of the cannon, hold the

button to charge it up, release the button to shoot, and press

to cancel. Cannons found on the ground can be entered like a pipe, but those found on walls and ceilings can only be entered by shooting into one from another Blast-O-Cannon. Some Blast-O-Cannons are fixed, while others move on tracks from side to side. After being blasted, Wario will bounce off surfaces encountered at sharp angles until he hits a surface perpendicular to his line of movement.

Blast-O-Cannons are common in desert-themed levels, such as Whoopsy Desert (where they are introduced) and Disturbing Tomb. In certain sections, Wario must shoot between multiple Blast-O-Cannons to climb a long tunnel and reach the top of the area.