Disturbing Tomb is the first secret level of Ratl Ruins in the game Wario Land: Shake It! It can be traveled to by finding a Secret Map in Whoopsy Desert.

This level has a desert theme and takes place during the night. The background consists of purple-colored sand and pyramids. Disturbing Tomb is full of Mummers, Flipstings and Bumbleprods. Many quicksand pits and Bomb Blocks also litter the area. Wario starts inside the pyramid where he finds a Mummer and a large coin bag. When he exits, he has to traverse quicksand pits while encountering several enemies and obtain the hidden diamond. Walking through another pyramid, he has to throw enemies to pave way for coins and avoid Turkeyjerks on his way to the third pyramid, which is full of enemies. After freeing the caged Merfle, he need to use lots of Blast-O-Cannons to reach higher places and run on roads made of Bomb Blocks. Following the Bomb Blocks, Wario can quickly return, but a hidden sky road can lead him to a diamond and accelerate his return. There are two quicksand pits that lead Wario to treasure chests. The golden enemy here is a golden Mummer and is also the only golden Mummer in the game. 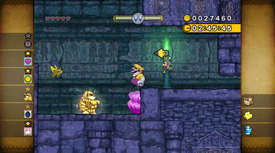