The Shake King is an evil pirate captain and the primary antagonist of Wario Land: Shake It! His design parallels that of Wario himself, with a similar rotund build, muscular arms, and stubby legs, along with a blue tint ringing his eyes. The Shake King has a distinctive spiky blonde beard, as well as hair on his arms; his eyes are black, with his pupils depicted as reddish-orange in official artwork and shown as yellow in game. 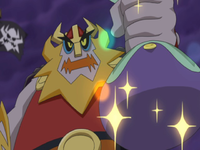 During the events of the game, the Shake King and his pirate gang, of many Bandineros, attempted to take over the Shake Dimension. In order to do so, they attacked the Shake Dimension, tied up its ruler, Queen Merelda, and imprisoned her loyal subjects (the Merfles), on their ship. The pirates stole the Shake Dimension's treasure, the Bottomless Coin Sack, as well, which has the ability to spit out an endless amount of coins every time it is shaken. However, one Merfle managed to escape from the pirate ship and get into Wario's world, to seek help in liberating the Shake Dimension from the Shake King's rule. If Wario collects all of the Boss Emblems, Wario can locate the Shake King in his ship to confront him.

In normal levels, if the timer for reaching the exit with the saved Merfle reaches zero, the Shake King will take Wario to Shakedown Schooner, then grab Wario, take all of his collected items away, and throw him back to the checkpoint block or farther away from it.

When Wario manages to obtain five boss emblems and gains access to the Shake King's ship, the final battle is split into three parts, as follows:

Wario must jump on the Shake King when he uses his charge attack (very similar to Wario's) to make him crash into a wall. Next, he must use a charge attack on his bottom repeatedly until he falls out of the wall, stunned. After he does that, Wario should throw him into any wall, doing a large amount of damage. However, the player may choose to shake the boss before throwing him to cause damage, as this produces large amounts of coins. The Shake King will then attempt other attacks - throwing a giant Bandinero, dropping fireballs, and even an imitation of Wario's Earthshake Punch. When the Shake King is charging any attack (other than the charge), Wario can use an Earthshake Punch to cancel the attack. If Wario does an Earthshake Punch when the Shake King does, Wario's punch will counter it and grant a chance to attack.

Wario should repeat the same process as stage one, except now when the Shake King uses the charge, Wario will need to jump on him two times. However, the Shake King uses a new attack where he leaps into the air and hovers side to side until directly above Wario, and then uses a powerful Ground Pound. This also cause shock waves horizontally, so Wario must dodge these as well as the initial impact. Another difference in this stage of the battle is that while the Shake King previously threw a giant Bandinero as a form of attack, he now throws a giant Bumbleprod, which must be completely avoided as it cannot be touched.

Wario fighting the Shake King in his residence.

This stage takes place in Shakedown Schooner in which the Shake King shook Wario in the regular stages if the player did not make it back to the beginning before time ran out.

In order to counter the Shake King's charge, Wario will need to jump on him three times. The Shake King uses powerful magic which he did not use in the previous stages of the battle, involving many electrical attacks. In order to dodge the thunderbolts he creates, Wario must stand in between them and move slightly to dodge the second wave which has a slightly different alignment. For the balls of electrical energy that he fires, Wario can just dodge them like a flying enemy. As for the large lightning bolts after the charge attack, he should dash under the Shake King while the lightning is temporarily stopped to charge up for a large blast. For the third blast, Wario should stand in close to avoid being shot by an energy ball.

Missions appear only after the first round of the game is completed.

The core obtained from Shake King's spirit can be used with a Bob-omb's core to summon the King Bob-omb spirit.