This is a list of glitches in the game Super Mario 3D Land.

Even though it is impossible to see in a screenshot, the camera shakes at this point.

In World 8-1, Mario must take the spiked ball before the Red-Blue Panels to the end of the flipping platforms. The ball will shake between the platform and the ground in the other side. Meanwhile, the camera shakes, until Mario jumps and the spiked ball falls.

To perform this glitch Special 8-Crown must be unlocked. Then position Mario/Luigi on the stage and Save and Quit. Occasionally, instead of a crown sprite, a Warp Pipe sprite will appear on the file-select screen. It can be fixed by loading the file and then quitting again.

when the long jump is being executed. Mario will then use his tail while using the propeller box, even when the player releases

. This is also achievable by crouching for a little while, jumping, then flying upwards.

In any level with a P-Wing block and a Warp Box near each other, if the player enters into a Warp Box immediately after grabbing a P-Wing before the text message appears, the player can use the P-Wing while warping. If the player uses the P-Wing while warping, Mario/Luigi will be invisible at the Goal Pole for the rest of the level. Interacting with certain objects will deactivate the glitch, like entering a cannon or jumping off of a rope.[1]

In World 1-1, the player must be Tanooki Mario/Luigi and do a Rolling Long Jump out of the house-like building. If the player bounces off of the first Goomba, they will pose as a normal Long Jump. Upon getting close enough to the second Goomba, it will abruptly die.

The shadow is touching the ground, through the platform.

When Mario or Luigi jumps into the air above a platform, their shadows pass through the platform and reach the ground.[2]

When Boomerang Mario enters into a Toad House, he must throw a boomerang and quickly leave the room. The Boomerang will disappear near the door.

After the Checkpoint Flag, the player should go to the long, wooden bar with three coins on it. The player has to go behind the two walls and the camera will warp to the two wooden Goombas, without the ground.[4]

In Special 8-Crown, if one uses a P-Wing during the boss battle against Boom Boom and Pom Pom, the music at the Goal Pole will change to the boss cleared music instead of the normal overworld music that plays in the level. [5]

First, the player should Save and Quit in any of the normal worlds. Then, on the title screen, they should wait until the very end when Mario jumps offscreen, and tap the screen (not press

) right when he starts flying. Then, at the file-select screen, both the title screen theme and the Toad House theme play at the same time.[6]

In any level with a Warp Pipe, if the player throws a Fireball or a Boomerang and presses

at the same time, the pipe sound fails to play.

If the player collides with both an enemy and a power-up at the same time, the power-up sound will play, but Mario or Luigi will remain exactly the same.

If the player is in statue leaf and presses

there will be no statue transformation sound effect.

Where ever a Statue Leaf is, the player must grab it and press

as soon as they touch it. Mario or Luigi will be a statue but the power-up sound will play. This glitch is very hard to do as it requires very precise timing.

Coins in the wall

In World 7-1, if the player manages to knock the Coin Coffer, thus making it face the stone wall and then Ground Pound it, the coins it will spit out will be shot into the rock.

In World 8-Bowser's Castle 2, the level starts off Mario/Luigi riding on the bone coaster. If the player stands on the tail after its first drop, then after the second drop, Mario/Luigi will fall down. If done right, Mario/Luigi will be standing on the edge of a platform, barely touching the lava but not dying. The player can safely move slightly left or right, but not much else can be done in this position.[7]

If Mario moves sideways upon long jumping, his speed will never stop increasing; his speed is capped if he moves solely forwards.[8]

Spiked ball through the wall

In World 8-1, the player must go to the Red-Blue Panels area. Then, they need to make the spiked ball cross the first Red-Blue Panel and reach on the second, timing correctly to crash with another spiked ball shot by the shooter near the platform. This spiked ball occasionally will fall with the half on the wall. 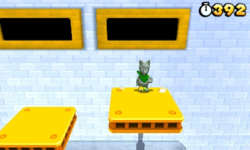 The player must have a Statue Leaf to perform this glitch. In World 2-1, the player must move Mario to the upward-moving yellow platforms and turn into Statue Mario. Then, the player will remain in their statue form unless the player lets go of the

In World 3-2, after entering the first pipe, the player must go to the first slope underwater on the floor and towards the front. If the player swims at around a 45 degree angle northwest holding left and up and presses the swim button once or twice, the player can swim out of water and onto land while still in swimming animation and controls. If the player jumps while swimming on land, the glitch will deactivate.[9]

In World 4-2, the player must jump in the bouncy platforms near the end of the level. When Mario jumps in the far left platforms, he will cross the ground and back instantly.

World 3-2 Cheep Cheep out of bounds

After entering the first pipe, if the player has a Mushroom in the inventory, is Small Mario or Luigi, and is wedged between the first Cheep Cheep and ceiling at a specific spot, the player can clip out of bounds by ground pounding the Cheep Cheep and jumping immediately after releasing and obtaining the Mushroom.[11]

Die in a Warp Box

To perform this glitch, Mario needs to go to the airship of World 2. Then, he should enter the first Warp Box. The player should reach the end of the bonus airship, but Mario should not enter the Warp Box at the end. Instead, the player should press the left camera control button so that the camera turns to the left. Wait until the Warp Box is offscreen then immediately go inside the box before Mario loses a life. If performed correctly, Mario should lose a life while the camera pans back to the main airship.

The player should do a Rolling Long Jump. When the player lands on the ground, they should let go of the Run button, but continue moving. The player will then run at a very high speed. This glitch works with both Mario and Luigi in any power up. [12]

If Invincible Mario or White Tanooki Mario were to Ground Pound onto a Baddie Box, the game will start to lag as the box explodes. The "explosion" will continue and the game lags until the player jumps off of the exploding box. A harsh grinding sound is heard during the explosion, and a sound resembling that of a Beanstalk coming out of a ? Block from Super Mario Bros. can be heard as Mario crouches when the player holds

. It is possible this sound is simply the sound Mario makes when he crouches, but distorted so much by the explosion it sounds like that. The glitch can only be done on levels such as World 2-4, 5-Castle and Special 1-3 where Baddie Boxes appear. Only the latter level (where there is a Roulette Block and Baddie Boxes are placed on a surface and not in the air) will have this glitch even after the player beats the level before and is also the only level where Luigi can execute this glitch. Both World 2-4, 5-Castle require the White Tanooki suit.[13]

The Prongo on top of the Wallop

In World 6-4 after the first two Beep Block bridges, there are two Prongos. The player needs to lead a Prongo up over the next ledge and over to the Wallop. By standing behind the Wallop, the Prongo will attempt to attack the player, but end up getting stuck on top of the Wallop instead.

At the start of the level, if the player activates the elevator and quickly stands on the front edge, a trigger is avoided and the enemies will not spawn until the Fire Piranha Plants appear.[14]

In World 6-2, the player must use a P-Wing to be warped to the end of the stage. Then, Mario must go to the rising tiles area, just before the Goal Pole. The gray tiles will be missing. If the player goes to the far left, and then come back to the area, the tiles will suddenly appear.

During the boss fight with Bowser on the castle in World 1, the player must use Tanooki Mario to glide across the gap between the bridge and the platforms at the start of the fight then press the switch when Bowser jumps to the left. If done correctly, the bridge will collapse with Bowser off-screen, and the game will never end the cutscene. The player, however, can still exit the level.[15]

In world 4-4, the player should go to the Coin Heaven. Before the end of the area, the player should crouch and walk off the edge when it turns. If the player keeps holding the crouch button while the white screen appears, on the other side the player will be stuck in the air, unable to move. The item storage will work, as well as the d pad.

Tanooki Mario or Statue Mario is needed to do this glitch. The player should go to Special 4-Airship, fight Pom Pom, then damage her once, then run across only the Donut Blocks and keep Pom Pom's shell attack on the right platform. If she comes out, she will jump to the left platform. When she is still in the air, the player should quickly jump and use Mario's tail to attack Pom Pom in the air, then she will fall in the hole if the Donut Block is dropped.