Not to be confused with Super Mario Spikers.

Super Mario Strikers (known as Mario Smash Football in European languages) is the first game in the Mario Strikers series. The game features a version of soccer without referees and rules, and has power-ups and special strikes which count as two goals. Its sequel, Mario Strikers Charged, was released for the Wii in 2007.

This was the last Mario game released for the Nintendo GameCube in Japan and North America. In Europe and Australia, Mario Party 7 holds this distinction.

The opening begins with a bird's eye view of Pipeline Central with very excited spectators. Mario's team and Wario's team make their entrances to the stadium. Wario tries to provoke Mario by shaking his rear and laughing. Both of Mario and Wario's followers are seen on the bleachers. Then Mario begins the game with a kick-off.

During the other matches, Peach steals the ball from Daisy, causing her to trip. Donkey Kong receives the ball, which leads to Yoshi to steal the ball for him, only for Yoshi to be attacked by a Bob-omb. Luigi attempts to steal the ball from Waluigi but misses. Waluigi is then paralyzed by a blue shell, allowing Luigi to kick the ball. A Koopa Troopa from DK's team jumps and pulls off a bicycle kick. A Hammer Bro from Daisy's team slips from a banana peel and gets electrocuted from the electric fences, allowing a Toad from Peach's team to headbutt the ball.

Wario's team unleashes a Chain Chomp, which chases Mario. Bowser wreaks havoc and breathes fire during Luigi and Waluigi's match. Back to Mario and Wario's match, a Toad from Wario's team has the ball, but is hit by a Spiny Shell, allowing Mario to receive it. Once he gets close enough, he jumps up high and unleashes his Super Strike, slamming the Kritter into the goal's net with the ball. Afterwards, Mario's team celebrates their victory as fireworks are seen in the sky.

On random occasions, Bowser appears on the field.

In comparison to actual soccer, the game features a smaller version of the soccer field, and each team has only five members, instead of the usual eleven-a-side rule. The match time can be manually set from 2 to 15 minutes, but is defined as 5 minutes by default. If time runs out when scores are level, a Sudden Death follows the regular game time where next goal wins. With this rule, no game ends as a draw.

Each team consists of a team captain and three sidekicks of the same type, as well as a goalkeeper. Every match of the game can be played in multiplayer. Up to four players can control a single team. If there are less than four players, they can switch their characters on the field, and the game switches control automatically to the next player when the ball is passed. Players can only control the goalie for a short time when he has the ball in hand. Because of this, the goalies are immune to all attacks by enemies or power-ups, and save most goals easily. The soccer fields are surrounded by an electric rail which electrocutes anybody who gets kicked against it by another player or by a power-up. The fence is placed right on the touchlines, preventing the ball and players from leaving the pitch. Thus, there are no throw-ins, goal kicks, or corner kicks, as seen in actual soccer.

One of the most notable changes is the non-existence of a referee. As such, there is no offside position and fouls are not punished. Players are given a variety of commands to kick or hit each other, which is a major part of the gameplay. Items (also called Power-Ups) exist as a help to the player to score a goal. They serve a function similar to the items in the Mario Kart series. To obtain an item, the player has to shoot the ball fiercely towards the goalposts. A player also gets an item each time a team member not currently holding the ball is tackled.

The Super Strike is a special ability of the team's captain. By performing it, the player can take a high-powered shot at the goal; if they score with a Super Strike, it counts as two goals instead of one.

There are a total of 13 playable characters in the game, with 9 team captains and 4 sidekicks. Each captain performs identically, but the size of the character and the chances of the items they obtain can vary. Sidekicks have slightly reduced abilities and cannot perform Super Strikes.

Within this game, it is necessary to know some basic and advanced skills. There are some explanations about these according to the Mario Strikers tutorial, the Strikers 101.

Other information such as Super Strikes and Power-ups are explained aside.

Power-ups are items that are obtained when the player attempts to make a goal, or gets fouled when not holding the ball. They appear at the top of the screen, on a bar displaying up to two items. The player can use the items to get or defend the ball, like tripping their opponents with bananas or summoning a huge Chain Chomp to stun them. Power-ups can be disabled at the Gameplay Mode screen. It is notable that the goalkeepers are immune to all sorts of power-ups, as they are to regular attack moves.

The Fields in Super Mario Strikers do not affect gameplay, and thus are only cosmetic changes.

There are four difficulty settings. The higher the difficulty is set, the more the passing, deking, and Super Strike skills of the CPU increase:

Note: In the Super Cups, the Novice (Rookie) setting is not available.

Cheats are special options available in the cheat menu. They can be unlocked by winning a Super Cup or a Gold trophy. Their effects vary. These only work for free play modes, not for the cups.

Two teams participate in a series at the field of their choice. They can play for as many games as they want.

Players choose a single team and participate in one of the four Cups, each progressively increasing the amounts of teams and games. If they quit their match in the middle, they forfeit the match.

The same as a Cup Battle, but the four Super Cups can be played. In itself, it's a hard mode version of Cup Battle, with new trophies.

Three to eight teams play in a league table or knockout bracket. The table can be a single or double round-robin. 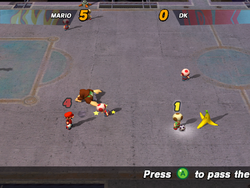 A tutorial menu. Players can learn the basics of the game and hone their skills. More than one player can participate, and the players can choose any character. While scores are counted, there is an infinite time limit. At the beginning of the match, there is a menu that automatically opens, and options show how to do certain techniques. During gameplay, a scrolling bar of information on the bottom shows what button inputs does what. Players can play only on Pipeline Central in this mode.

Players can view their awards and records.

In concept artwork, Mario is shown wearing several different outfits, which were abandoned in favor of the design used in-game. It also shows Mario's team number was 10; however, in the final game, the number 10 was assigned as Peach's team number, while the number 1 (usually reserved for goalkeepers) was assigned as Mario's team number. Peach is also shown as wearing a different outfit. Early screenshots of the game showed different textures and outfits for characters. Super Strikes were also given to teammates and Team Captains were given different Super Strikes, which resemble the Mega Strikes used in the next game, Mario Strikers Charged.

A promotional browser game was released in 2005 called Super Mario Strikers -- Heads Up.

An advertisement for the Player's Poll Sweepstakes.

Issue 198 of Nintendo Power released in December 2005 included a Player's Poll Sweepstakes as a promotion for the game. The grand prize, awarded to 25 winners, was a copy of Super Mario Strikers and a soccer ball with a Chain Chomp pattern. The soccer ball was also given to the 100 winners of the second prize. The third prize, given to 50 winners, was a Nintendo Power t-shirt.

A similar Chain Chomp soccer ball was later sold at the Nintendo World store. Compared to the original, the pattern was on different areas of the ball, and there was no Super Mario Strikers logo on the back.

This glitch can appear during matches. A character must hold the soccer ball and go to the opponent's field. If the player shoots the ball towards the goalie without charging and is hit by a Blue Shell and frozen at the same time[1], the ball will remain stuck on their feet, but keeps emitting the purple rings caused by the kick while the victim is frozen. Because of that, the goalie responds to block the shot, repeatedly lunging and falling in an attempt to get the ball. In this state, the Ball cannot be taken by the other characters; the glitch wears off once the victim is unfrozen and shoots the ball normally.

If player two rapidly taps the

buttons on a captain, as player one pushes

on the locked Super Team on the character select screen, the first player can play as Super Team without unlocking them.[2]

In order to recreate this glitch, it is mostly recommended to play a Grudge Match with 2 players or more, and also to play with the Perfect Strike cheat code enabled. First, players must make sure that the rival captain is a tall player like Donkey Kong, Super Team, Waluigi, or Wario, then choose any other captain for their team. Before doing the Perfect Strike, the rival captain (along with one or two sidekicks if possible) must get up close in front of the Kritter goalkeeper while he faces the player's captain; only then, they should do the Perfect Strike from a long distance and, if executed correctly, the rival captain will get hit by the ball and not the goalie, preventing the score.

As a consequence, both the player's own and their rival's teams will remain unable to move; not only that, but the camera will also be stuck on a different angle while still focusing on the ball. The only character the player can unfreeze during this glitch is their rival's Kritter goalkeeper; to do so, they have to fail a Super Strike, so the Kritter can either catch it or throw it back; both of these actions will allow the Kritter to move again. To fully disable the glitch, the player has to score a goal so the screen displays the celebration and the replay; after that, all characters will be able to move again.[3]

This is the first game to feature Kenneth W. James, who temporarily replaces Scott Burns, as the voice of Bowser, a role that would become permanent starting with Super Mario Galaxy. Likewise, Jen Taylor did not voice Princess Peach and Toad or record any new voice clips for the characters, even though the game was released before her departure from Nintendo, making it the only Nintendo GameCube Mario game where she does not voice Peach and Toad.