Diddy Kong Racing Adventure is a rejected video game pitch made by the Climax Group for a Diddy Kong Racing sequel on the Nintendo GameCube around 2004.[1] The project was never announced to the public in any capacity and only became known after an amateur video game archivist acquired the prototype and published a video about it in November 2016.[1] Only the demo for their pitch was developed, in around April 2004, running on Xbox hardware as the tools had already been developed at the time.[1] A playable build of the game was leaked online in May 2020.

An earlier document had a similar plot, except for the role of Wizpig being instead filled by a new villain, a white rhino named "Baron von Snort".[1]

Diddy Kong Racing Adventure would have an Adventure Mode like its predecessor.[1] In this mode, the player would have been able to travel across Kongo Island between different villages.[1] The island would have also featured a number of additional hidden areas, characters, and secrets.[1] To challenge the bosses, the player would either have to beat them in a preliminary heat or collect an item for the villain. These bosses would have to be defeated in order to save Diddy Kong's friends.[1] The game would have also featured non-racing events such as obstacle courses and stunt challenges.[1]

Race vehicles would have included planes, jet skis, quad bikes, buggies, and hover scooters.[1] The game would have used a "mount control" system, in which the player would be able to adjust their character's position on the vehicle using

.[1] The pitch document promised several new features such as the ability to change vehicles mid-race,[1] the ability to collect items to customize the vehicles and reach new areas,[1] and special attacks exclusive to each character.[1] By collecting fruit across the course, the player would have been able to use a different type of attack. Collecting a dark fruit would have allowed that character to use their unique special attack at the cost of health. Players would have also had a "melee rumble" attack that costs bananas to use.[1]

Diddy Kong Racing Adventure was planned to include local multiplayer with up to four players, allowing players to play using every course and character unlocked in the single-player mode.[1] Each course would have featured a normal and "monochrome" mode (with differences in both versions of the track), as well as time of day and weather settings.[1] Other modes also would have been included, playable in either free-for-all or 2-vs-2. These include a "straight race" mode, time trials, Knockout Cup, in which the last place racer is eliminated from the race; Elimination, a demolition derby mode; Show-off, a "Simon Says" mode in which players must perform various skills; and Fruit Bowl, in which players must collect a certain type of fruit.[1] 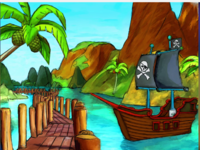 The pitch document mentions that the game would have featured 16 villages, each with three different courses (that would have also been playable in a mirror mode). Locations that were planned for the game included:[1]

Climax had planned to have fourteen playable characters in the game, with many of the proposed characters being returning characters from the original game. Similar to the Mario Kart series, Diddy Kong Racing Adventure would have used a weight class system. Each character also would have had a unique special move, usable by collecting a dark fruit.[1] The roster was never finalized, as Rare being purchased by Microsoft meant that the ownership of certain characters was uncertain.[1]

Dixie Kong and Lanky Kong were also considered to be in the game as playable characters. The team had also hoped to include Banjo and Mumbo Jumbo from Rare's Banjo-Kazooie series. Had a character been unavailable, other members of the Kong Family would have been included to fill spaces as needed.[1]