Donkey Kong Country Barrel Maze, or Donkey Kong Barrel Maze, is a browser game developed by Skyworks Interactive (formerly Skyworks Technologies) and published on their website, Candystand.com,[1] under Nintendo's endorsement. It requires Adobe Shockwave to run. The game is based on elements from Donkey Kong Country and has Donkey Kong in a quasi-starring role, with Diddy Kong and Cranky Kong only making cameo appearances on the title and loading screens. The player controls a barrel loaded with bananas and has to roll it through a series of obstacles to reach DK at the end of every stage in the game. 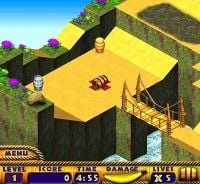 The beginning of level 1

Donkey Kong Country Barrel Maze is an isometric platform game where the goal is to navigate a barrel through ten maze-like stages. In each level, the barrel has to be safely delivered to Donkey Kong. The barrel is maneuvered using the arrow keys or the number pad. Levels are composed of pathways, valleys, river streams, and high ledges strewn with items and obstacles. Although levels have a linear path to the goal, items may require diverting from the main course to collect them. 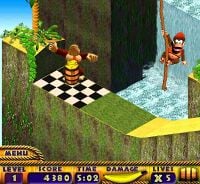 DK with his bananas

At the beginning of the game, the player is given 5 lives. Every level starts out on a spot marked by a red cross and the barrel initially has a full energy bar (taking the form of a banana, labelled "DAMAGE"). The player has a set amount of time to reach the finish, which varies from level to level. The barrel can take damage if it bumps into an enemy or falls from a height onto the ground, and will instantly lose all of its energy should it end up in a bottomless pit or a river stream. When the energy bar is completely drained, the barrel breaks open and loses a life, respawning at the starting point with the timer reset. The barrel also has sensible weight, which causes movement to be more difficult on slanted paths, or increase the amount of damage taken by the barrel in relation to the fall distance. Walls and ambiental objects, such as shrubs, have no bearing on the barrel's condition, although some palm trees shake when bumped into, and in level 5, such trees produce coconuts that can damage the barrel.

The end of a level is signalled by a checkerboarded section, where Donkey Kong awaits the barrel. Once there, the barrel turns upright and reveals its bananas in front of DK, who rejoices by beating his chest. This leads to a screen which prepares the player for the next level.

If all lives are lost before completing all 10 levels, the player has to start the game over. If level 10 is completed, the player is shown a screen saying "Congratulations! You Finished All The Levels".

The game presents a score that increases with the items collected along the way. The amount of time remaining when a level is completed is converted into points and also added to the score. For every 25,000 points, the player earns an extra life.

Most of the time, items are optional to collect. However, bananas may be needed to replenish the energy bar after taking damage in an unavoidable situation, such as rolling off the cliffs in level 2 and level 10. 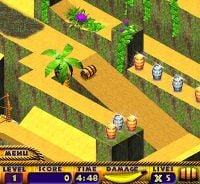 The barrel starts in a broad area behind a short bridge that crosses over a river. Soon after the bridge, the barrel encounters a sharp turning and needs to steer to go up a slant. Following this, there is an inevitable puddle, at the right of which the path continues with a banana bunch to help the barrel regain energy. Going down the tight path that follows, the barrel will soon have to cross a bridge and turn 90 degrees to roll down a long slant, ending in a ramp that helps it skip a river stream. From here, there is another slant heading further down to the goal. 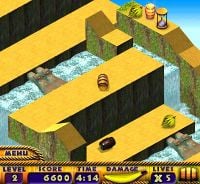 The barrel starts on a stretch of ground surrounded by a stream, which has to be crossed using two hippos that bob up and down in the water. The next section involves the barrel consecutively falling off two ledges and crossing two streams of water using hippos. Bananas can be picked up on the bank at the base of each ledge to regain health after fall damage—however, an Enemy Barrel can also be encountered on the second bank. After this section, the barrel should steer 90 degrees and carefully descend a cliff, then use a series of hippos to cross the following cascade streams and eventually reach the goal. 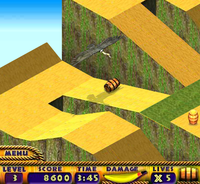 The barrel has to travel on a serpented canyon soared by Buzzards. The path features numerous denivelations, akin to half-pipes. Nearing the goal, the barrel also encounters several boulders. 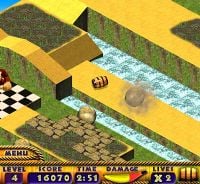 The level is made of a series of zig-zag paths filled with boulders and puddles of mud. There are alcoves in the walls flanking these paths that allow the barrel to hide from the boulders. The stretch of ground before the goal is covered in mud, but a paved way helps the barrel slalom through the mud safely. 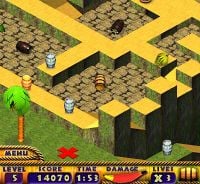 The barrel commences outside of a fortress-like structure, on a grassy land dotted with coconut trees. The player has to steer the barrel between these trees and eventually reach the entrance to the fortress, represented by a bridge that is guarded by a Venus Fly Trap. Inside the fortress, the barrel has to navigate a labyrinth of rooms populated by Enemy Barrels, then carefully roll down a narrow path raised above the floor. At the end of the path is another room with an Enemy Barrel, adjacent to the goal. 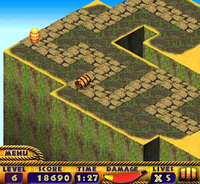 The barrel begins on a high ledge, facing a paved path that stretches over a puddle. Immediately afterwards, there is a downward slope that helps the barrel ramp over a pit, landing in a puddle of mud. Ahead of the puddle is a banana bunch that restores lost health. A downward slope from the side of the puddle leads the barrel onto another mud-covered area paved with a serpented path. The player can choose to navigate the barrel safely on the serpented path, or dash straight through the mud and risk losing health. Going around a crevice, the barrel eventually escapes the muddy area and encounters a grassy stretch of land which leads to the goal. An initially hidden boulder starts rolling in the direction of the barrel as it enters the grassy area, prompting the player to be careful. 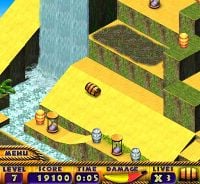 The barrel starts near the base of a long slant that leads to the top of the level. From the peak, the barrel can descend onto some small grassy platforms and eventually reach a light slant that goes into a stream. As it lands on the slant, the barrel should quickly cut to a grassy plot of land at the left and continue on to encounter a bridge, avoiding a boulder and reaching the goal.

The starting time limit is rather restricting, but there is an optional path littered with Hourglasses that extend the time. After going up the large slant at the beginning and reaching its peak, the barrel can fall down the yellow platforms on the left and carefully roll down a bevel to encounter the bank of a river, which the barrel can explore to collect the bonuses found there. The bank continues with a bridge to a span of muddy land filled with other bonuses and leading back to the starting point. 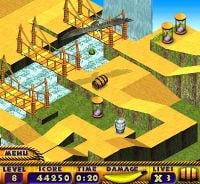 The barrel begins behind a downward slant, followed by two bridges over a river stream. While the main path is via the bridge on the left, the player can take on the right bridge first and climb a short slant to reach a higher platform with Hourglasses, which are helpful for extending the short time limit. Meanwhile, a Buzzard flies over the area and attacks the barrel with coconuts. Returning to the main path, the barrel has to carefully navigate a maze raised above the ground. Falling off forces the barrel to roll back to the start of the maze and retry it; however, the lower ground can be explored for bonus items and more Houglasses, although a Venus Fly Trap is also present here. Immediately after traversing the maze, the barrel will have to cross the river stream again by rolling down an "S"-shaped walkway, connected by a bridge and several hippos. The barrel will continue on a series of upward slants and reach a stretch of land where a boulder should be avoided, then turn left to reach the goal. 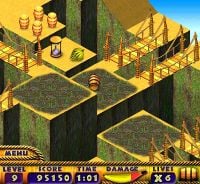 The barrel begins on a small patch surrounded by multiple cliffs and a river stream. Throughout the level, it has to cross bridges over pits and consecutively pass through muddy puddles and fields patrolled by Enemy Barrels. A Buzzard eventually appears above the highest ledge and attacks the playable barrel. The goal is located a few bridges beyond, on the brink of a ledge. 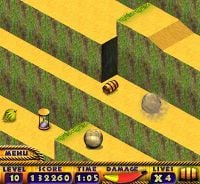 The barrel starts at the top of a mountain-like descent with two ways to follow. On one hand, the barrel can go straight ahead and roll down two abrupt slopes to reach the base of the area, where only multiple bonuses can be found. On the other hand, the barrel can simply fall onto the platforms under the starting point, avoiding the boulders that roll towards it. Banana bunches can be regularly encountered to restore the barrel's energy after a fall or a bump with a boulder. The barrel must carefully go down the path in this fashion and gather a multitude of bonuses, eventually reaching a stairway with banana bunches. On the final stretch of land, the barrel should pass an Enemy Barrel and fall off the edge ahead to land on the goal.