It has been requested that at least one image be uploaded for this article. Remove this notice only after the additional image(s) have been added. Specifics: for the Storyline, Items and Enemies sections. Maybe one screenshot for the Differences section, showing a really basic action in the game (see these sections for exemplification.)

Mario vs. Donkey Kong: Minis March Again! is a DSiWare action puzzle game and a follow-up to Mario vs. Donkey Kong 2: March of the Minis. Once again, the focus of this game is on the mini toys produced by Mario's toy company, which have to be guided to the exit in each level. The gameplay of this title is simplified in comparison to the previous game, as the player no longer has control over the minis after initiating them and can only use the touchscreen to manipulate the environment around them. This gameplay style would become standard in all later Mario vs. Donkey Kong games. In addition, the game allows players to create their own levels and, prior to May 20, 2014, share them using the Nintendo Wi-Fi Connection procedures.

After the success of the Super Mini Mario World theme park, Mario and Pauline open an expansion of it. A crowd of Toads are in line for the opening celebration, along with Donkey Kong. As Donkey Kong reaches the front of the line, he discovers the tickets have just sold out. Donkey Kong bursts into anger and grabs Pauline. As Donkey Kong runs for the elevator, Mario leaps to rescue Pauline, but ends up failing and ripping the fringe of her dress. As Mario lies on the ground, a few Mini Marios come towards him, volunteering to help save Pauline.

Later on, when Mario reaches to the top of the tower, he finds Pauline is there waiting for him. Relieved, Mario opens the door, ready to hug her, but then all of a sudden, Donkey Kong turns off the light and captures Pauline once again. Mario and the Mini Marios jump out of the tower after Donkey Kong, leading them to more floors.

Differences from Mario vs. Donkey Kong 2: March of the Minis[edit] 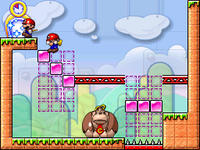 The timer that appears above the exit forces all Minis in the level to reach the exit consecutively.

Mario vs. Donkey Kong: Minis March Again! features a less detailed story with slight changes from March of the Minis; however, the most major differences between the two games center around their gameplay. Minis March Again! removes direct control of the Minis, including the ability to make Minis jump and change directions at will using the

stylus. Instead, after a Mini is activated by tapping it with the stylus, it moves automatically. Minis also automatically jump whenever they reach ground one block above them. If a Mini falls from a height of seven to nine blocks, it becomes momentarily dizzy and stunned. Aside from activating the Minis, the player can only change the environment around them to direct them to the exit. Minis are now required to reach the exit within a set amount of time; otherwise, the exit is boarded shut and the player loses the level. Additionally, every Mini is required to reach the exit to complete the level.

Minis March Again! re-introduces the life system from Mario vs. Donkey Kong using M-Tokens. An M-Token is lost if time runs out, if a Mini touches any enemy, falls onto spikes or other dangerous obstacles, falls from a height of ten blocks or more, or if the next Mini fails to reach the exit in about five seconds after one has entered. The player can also lose a token by restarting or exiting a level before it is cleared for the first time, which was also the case in Mario vs. Donkey Kong. Losing all tokens results in a Game Over, and the player can choose to restart the current level or exit the game. Extra lives can be gathered with every M-Token or 100 Coins collected throughout the game.

Many level mechanics return, but most designs include a large focus on the redesigned Pink Block mechanic, as referenced in the game's logo. The Construction Zone also returns from the second game, but Minis March Again! has some different objects available. Plus Mode, which first appeared in Mario vs. Donkey Kong and was not included in the second game, is also available after beating the first four worlds. 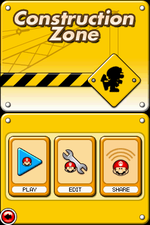 In this game, there are four different types of minis that the player can use in levels. Mini Marios are the default type for most of the game, but Mini Toads, Mini Peaches and Mini Donkey Kongs are also playable on the Rooftop floor. There are no significant differences between the types of minis.

After three levels with a particular type of mini are completed on the Rooftop floor, the player will be able to switch most Mini Marios in the game with that type of mini. This is done by tapping the "Characters" button in the Showroom section of the Options menu. The only levels where this change does not take effect are key and Donkey Kong levels, where Mini Marios are always used.

Each floor of Super Mini Mario World has its own theme and unique elements that set it apart. They each consist of eight regular levels (one of which is a key level,) a DK boss battle, and a Special Level.

In American and Japanese regions, the floor count for all floors excluding the Basement and Rooftop simply goes from "Floor 1" to "Floor 4", whereas in all other regions, the count starts from "Ground Floor" and ends at "Floor 3".

After the player defeats Donkey Kong in Jungle Rumble, a mode with new levels, Plus Mode, is unlocked. In these levels, the player can change the environment only after all Minis are initiated at once by pressing the "START" button and waiting for the 3-2-1 countdown.

The game contains a variety of objects that both the player and the minis can interact with. Most of these objects, with the exception of Ladders and clocks, are listed in the game's help menu under "Special Items".

Thanks to the runaway success of Super Mini Mario World, Mario and Pauline have expanded their toy-filled theme park and invited everyone to the opening celebration. Everyone, that is, except Donkey Kong, who was too late to get in! Donkey Kong decides to crash the party and kidnaps Pauline along the way! Can Mario and his Mini Marios rescue Pauline from Donkey Kong’s clutches yet again?

In addition, make sure to explore the Construction Zone, where you’ll find all the tools needed to make your own original levels. You can then share your masterpieces or download levels created by others via Nintendo Wi-Fi Connection and broadband Internet access, or via local wireless.

The re-opening of Mario’s theme park, Super Mini Mario World, was going so well... until Donkey Kong burst in and kidnapped the hapless Pauline once again! So it’s up to you and the Mini Marios – tiny mechanical Mario toys – to rescue Pauline from that crazed ape’s clutches.

Instead of controlling the Mini Marios directly, you use the stylus to manipulate objects in each trap-laden level, and lead the fragile toys safely to the exit. Once you clear all eight levels on a floor, you’ll get a chance to pummel Donkey Kong with your Mini Mario-launching cannon!

Another feature is the Construction Zone, which allows you to create your own original levels, play levels that you or others have made, and share or download levels via Nintendo Wi-Fi Connection or local wireless communications.

The game was directed by Yukimi Shimura of Nintendo Software Technology Corporation, under the supervision of Shigeru Miyamoto. The soundtrack was provided by Lawrence Schwedler, who has composed for other Mario vs. Donkey Kong games as well. Notably, the game's level designer, Stephen Mortimer, would direct several future Mario vs. Donkey Kong projects.

For a complete list of media for this subject, see List of Mario vs. Donkey Kong: Minis March Again! media.

The game's soundtrack primarily consists of tracks from Mario vs. Donkey Kong 2: March of the Minis, most of which play in earlier parts of the game. However, there are also many new compositions and arrangements, including the two tracks below, that are used later in the game.