Wario opens an amusement park called Wario Park, which has four roller coasters. Mona, Jimmy T., Kat & Ana become the park's employees and run it along with Wario, with each character running one coaster.

Aside from the opening which shows the Wario Park scenes, WarioWare: Snapped! has no storyline. 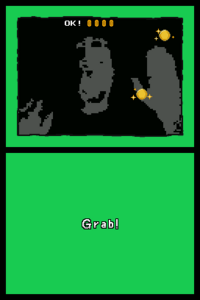 The player, portrayed by their silhouette as seen by the camera, has to grab the coins in one of Wario's microgames.

As with previous WarioWare installments, WarioWare: Snapped! uses a special control scheme. The Nintendo DSi's built-in camera is used to create a silhouette of the player in the microgames. During the game, the Nintendo DSi is placed on a flat surface. To ensure that the player is at an ideal distance from the DSi, the player has to put their head and hand to match the respective outlines on the screen. In the microgames, the player must perform certain movements to win the games, such as grabbing coins with the hands, opening the mouth to eat food or catching an object with the head. At the end of a stage, photos of the player that were made during the won microgames are put into a humorous slide show.

In comparison to its predecessors, WarioWare: Snapped! has a much smaller amount of content. Only twenty different microgames are available which all allow for a considerable amount of time. There are neither different difficulty levels nor increasing speed. The game features four different stages which are hosted by Wario, Mona, Jimmy T. and Kat & Ana, respectively. Each stage includes five microgames that appear in random order. While fifteen of the microgames are designed for one player, two players have to act in Kat & Ana's stage.

There is no direct penalty for losing a microgame, but it will result in a missing part of the five-part slide show at the end of a stage in each case. There are four different slide shows unique to the character. Wario animates the player's actions, Mona and Kat & Ana add stylish decorations to the player and Jimmy T. puts the photos into a comic strip. However, the slide shows cannot be saved.

Additionally, the game's staff credits appear as a mini-game where the player has to steer a line of roller coaster cars through the space. They must collect the occupation terms and the letters of the staff members to score points. The high score of the mini-game cannot be saved, either.

The Wario Coaster microgames require big moves. After this level is beaten, the player can see themselves doing the actions required to win the microgames in a slideshow.

In Mona Coaster microgames, the player must align their body with stuff that appears on-screen. After the level is beaten, a slideshow shows the player using decorations, based on the microgames actions.

In this stage, the player must do varied actions. In the end, snapshots of the player are used to create a comic strip.

In this stage, two players are required to play.

Like previous games in the series, WarioWare: Snapped! features not only text adaptations, but also graphical and sound adaptations as well.

Wario™ returns with more manic action made especially for the Nintendo DSi system! WarioWare: Snapped! uses the built-in Nintendo DSi camera to make players the star of the show by placing them right into fast-paced minigames. Take part in wacky challenges simply by moving your face and body as you travel along four wild roller coasters, hosted by Wario and his pals. Beat the minigames using motions ranging from large to small or play with a friend for even more fun. Wario even has a few tricks up his sleeve for after you've finished moving...