This article is about the game. For the microgame, see Wario Land (WarioWare: Smooth Moves).

Desiring to replace or restore the castle he lost to his rival in Super Mario Land 2: 6 Golden Coins, Wario sets out to steal a golden statue of Princess Toadstool from the Brown Sugar Pirates and Captain Syrup, which he then intends to ransom for the money to buy his own castle. Along the way, he collects or steals any other coins and treasures he finds or knocks out of enemies. The game is spent by navigating a number of levels to reclaim his lost treasures, and has a significant level of re-playability due to the branched path that many of the levels take. In the end, Captain Syrup (revealed to be female, which was hidden in the instruction manual) is defeated while Wario ultimately gets anything from a birdhouse to an actual planet or moon for himself based on the amount of treasure collected as compensation for failing to steal the statue (due to Mario retrieving it by airlifting it).

Wario Land: Super Mario Land 3 introduces a new mechanic where the ending is determined by the amount of coins that Wario has collected in the game. The more coins and treasures he collects, the better his new home will be. If Wario does not complete the game with the best ending, the player will be urged to "please retry!" after the credits, and any levels with missing treasures will be marked flashing on the map.

The title screen of the game.

Wario jumps in and out of a body of water while avoiding some common enemies: a Watch and a Pinwheel.

Wario Land: Super Mario Land 3 is a 2D platforming game. It is divided into seven worlds, which each are divided into multiple courses. In most courses Wario has to trade in ten of his coins for one big 10 Gold Coin to open the door to the next course. Once the player completes a course, the next course will become available, and so on. The game also allows players to revisit levels that have already been completed.

It has several mechanics that are similar to the Super Mario games such as the transformation system. Wario can also touch enemies as long as they do not have any hazards equipped, so he can stun or defeat them by performing a Body Slam, ground pound, touching soft-spots, or tossing at others.

One of the main features in Wario Land: Super Mario Land 3 is the various transformations that Wario can go through by collecting a Power Up Pot. These special powers can at times help Wario overcome obstacles and defeat tough enemies; however, if Wario takes damage when in any of the first three transformations, he will transform into Small Wario, who dies instantly upon taking damage. 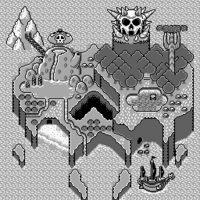 An overview of the Island

Each world has a boss that Wario must defeat at the end. Here is a listing of the bosses in order, and which world they correspond to. Wario will not be able to fight bosses again once they are beaten.

Although it did not sell as well as its Super Mario Land predecessors, the game received mostly favorable reviews. The game placed 71st in the 100th issue of Nintendo Power's "100 best Nintendo games of all time" in 1997.[2]

If a Guragura is on the screen, and the player makes the camera scroll enough so that the Guragura disappears, the player can then make the camera scroll back, and the Guragura will usually no longer be swinging his spiked ball. However, his animation acts as if he is still throwing it. Scrolling him off the screen and making him reappear, or stunning him, will make the spike ball reappear as well.

button, Wario will jump in midair, effectively giving him a second jump.

Floating in air after a large ! Block[edit]

If Wario activates a large ! Block and quickly jumps afterwards before the level is finished, he will be standing in mid-air and even do his end-of-level pose.

Ground Pound in a ladder[edit]

If Bull Wario performs a Ground Pound above a ladder and quickly descends it while the ground is shaking, he will eventually stand inside the ladder. From here, he can jump down to descend it more quickly than ordinarily climbing down it.

Ground Pound through a narrow passage[edit]

If Bull Wario is standing adjacent to a narrow passage (one block tall) and performs a Ground Pound, he can enter the passage while the ground is shaking without having to crouch. He can then continue to walk through the passage even after shaking.

Note: This glitch is only possible in the Game Boy version of the game. It was fixed in the 3DS Virtual Console version.

It is possible to skip certain levels or even worlds if there is a possible path to the right and an open path in a different direction. This can be done by pressing

and a different direction simultaneously on the D-Pad.

simultaneously, Wario can walk to Course No.02 even if he hasn't completed Course No.01.

The reason why this occurs is that when the game first checks if Wario can possibly move in a certain direction (even if the direction is not unlocked yet), it checks button presses in the order

. After this, to determine which direction Wario should move, the game checks which button is pressed a second time, this time in this order:

[3] This discrepancy makes the glitch possible.

In the 3DS's Virtual Console version, the button checking is consistent, by always checking in this order:

. This consistency fixes the glitch and makes it impossible to perform on the 3DS.

As Jet Wario, the player should go past the first Muncher pit. One section has a vertical column of 5 coins; this has a hidden ladder above. (This is easiest to reach in high tide, but is still possible in low tide.) This ladder leads to a hidden platform above with coins.

It is possible for Jet Wario to continuously fly either to the left or right (by starting a new flight after stopping one). If Jet Wario flies to the left (to the beginning of the level), odd gray rectangles appear in the sky. Eventually, the left wall can be seen, but it is one block wide and contains an invisible block next to it. If he descends to the beginning of the level, there are other graphical glitches that occur, where random blocks replace the background (including the water). Scrolling to the right and back to the left fixes the graphical glitches.

If Jet Wario instead flies to the right, more strange gray rectangles can be seen, and he can end up above the cliff. Going to the right of this cliff reveals more garbage blocks, and is virtually unplayable. If Jet Wario flies past the left boundary here, he will end up on the right side, and bringing out a 10 Gold Coin will make it disappear. Wario will be trapped here, and the only way out is to wait for time to run out or reset the game.

It is also possible for Jet Wario to fly out of bounds in Course No.35. Jet Wario can fly past the top-left corner of the first section, and he will eventually end up below the screen, where more graphical glitches occur. It is possible to break blocks, which affects another portion of the level. Eventually, a door can be found, which will take the player in a different part of the level.

In Course No.01, at the end of the level in low tide, a Guragura takes a 10 Gold Coin and tosses it at the goal door. If Wario leaves this room and revisits it, the Guragura will respawn again, and will throw another 10 Gold Coin. This time, since the goal door is already unlocked, the 10 Gold Coin will bounce off the wall and land on the ground, and Wario can collect it. This can be repeated a limited amount of times: the Guragura will move right every time this is done, so it cannot be done forever (unless the level is revisited again in low tide).

The glitch is not possible in high tide since the Guragura no longer unlocks the goal door.

In Course No.38, it is possible to get a Guragura trapped within the giant ! Block at the end by throwing it at it.

Normally when Wario loses a life, any enemies are frozen and do not move. However, by pausing and unpausing, enemies are unfrozen and can move again. This glitch is graphical and does not have any added effects.