The Knight[1] is a soldier enemy in Wario Land: Super Mario Land 3.

In Wario Land: Super Mario Land 3, the Knight first appears as a miniboss that guards a room in the fortieth and last course of the game. It takes the appearance of a spear-holding knight that wears a generic armor, a helmet, and a breastplate. It also displays a menacing spike on its helmet. Wario cannot attack this enemy from the top because of the thorn on the head, and the spear is also dangerous. The only weak point of the Knight is the back. Wario must attack the Knight by hitting it with a Body Slam three times, in order to ground it. If Wario is Small Wario, he can produce a 10 Gold Coin and throw it at the Knight to damage it instead. Whenever the soldier takes damage, it turns to face Wario, rushing at him to stab him with its spear. The soldier calms down after a while, and the process can be repeated. On its last hit, the Knight's visor breaks revealing its face which resembles a duck similar to D.D.

The Knight is rather a mini-boss than an enemy, due to its rarity and the way Wario can defeat it. After it is defeated, a door that leads to the next room opens; thus, this is the only enemy (excluding the bosses) that must be defeated to progress forward. 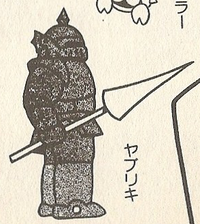 Knight as depicted in the Super Mario Kodansha manga

The Knight appears in the Super Mario Kodansha manga guarding Captain Syrup's room like in the game, but it faces Mario, Luigi, and Peach in addition to Wario. Once the Knight's armor is knocked off it is revealed it was actually three D.D. standing on top of each other.

Knight
Tribe: Pirate
Disposition: Quick to take offense
Game appearances: Land 3
Syrup's room watchman
This armored soldier is invincible when running at great speed, so just run away from him. You can defeat him by hitting him three times with your body, but it is safer to climb a block and hit him with 10-Coins three times.