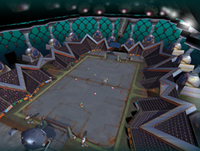 Overhead view of the stadium

According to the Japanese Super Mario Strikers site, it is located underneath "a certain city"[1] possibly meaning Diamond City. The capacity is 35,000, and it is the Star Cup's special field.