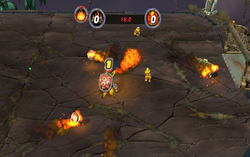 Fire Storm! is Bowser's Super Ability in Mario Strikers Charged. The ability can only be used once Bowser has collected his special item, which is shown as his own head. When Bowser uses the item, he will start to breathe fire in front of him. This will burn all players who touch the flames, even if they are his teammates. If Bowser moves while breathing the fire, the fire will toss around as well, somewhat acting as a whip. The move can be helpful, as burned players will run around in pain, and human players will have reversed controls. Bowser can then move on into his Mega Strike. The duration of the move is determined by a meter on the top of the screen, which shows how much longer Bowser can use the move. If Fire Storm! is used on either Goalie, the Goalie's hands will catch on fire, similar to if Toad uses Fire Meteor on one. If Fire Storm! is used near Wario's special, Gas Mask!, a large explosion will occur, both special moves end, and both Bowser and Wario will be sent flying.