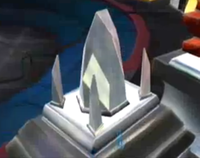 The Crystal Cup on a pedestal

The Crystal Cup is the second tournament in Mario Strikers Charged, in the Road to the Strikers Cup mode. It is available after completing the Fire Cup, and also more difficult than it. It consists of ten preliminary matches, a semi-final match, and the championship game.

First, the player plays against five different randomly selected captains and their teams in five matches. After beating them all, they will then compete against the same five opponents again with different teams. In order to move on to the semi-final round, the player's team must get into the top 4 of the 6 teams via points (3 for each match won, 0 for each match lost, 1 for each match lost at sudden-death). In the semi-finals, team #1 plays #4 while team #2 plays #3, and the winners of those two matches play each other in the championship game.