From the Super Mario Wiki, the Mario encyclopedia
(Redirected from Spike (obstacle))
Jump to navigationJump to search

This article is about the common obstacle. For other uses of the word "spike", see Spike (disambiguation).

Spike Traps (or spikes, sometimes Spiked Blocks,[1] spiked platforms,[2] spike platforms,[3] or Spiked Floors[4]) are harmful obstacles that appear in nearly all Mario games. Spike Traps can be stationary, retractable, or attached to a moving object. They are first introduced in Super Mario Bros. 2. They function similarly to the Icicles from Mario Bros.; however, Spike Traps fall differently.

Spike Traps are very common obstacles throughout the Super Mario series. When touched, they cause the player to lose their current power-up and if the player is Small Mario, they will lose a life. Players can safely traverse across spikes when invincible without any consequences.

In Super Mario Bros. 2, in a few levels, the player has to ride an Autobomb in order to cross some Spike Traps.

In Super Mario Bros. 3, if Mario or Luigi wears a Goomba's Shoe, he can easily hop across spikes but can still be hurt from touching them with his side or head. In Super Mario Advance 4: Super Mario Bros. 3, the World-e level Castle Dash contains circular Spike Traps that resemble large Spiny Eggs that simply float in place. These also appear in the Orange Mushroom House mini-game alongside moving blue ones.

In Super Mario World, Yoshi can safely walk on Spike Traps due to the boots he wears. This game also introduces the falling spike.

In Super Mario Bros. Deluxe, Spike Traps appear during certain levels of the You vs. Boo mode. They can be changed to solid blocks with the use of the Face Blocks.

In Super Mario Sunshine, they only appear in Corona Mountain. Coming into contact with them will usually cause Mario to lose a life. 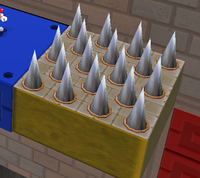 Spike Traps appear in New Super Mario Bros. Wii in two forms: traps with each spike being one block wide like in Super Mario World, as seen in World 3-

, and traps with each spike being half a block wide like in Super Mario Bros. 3, as seen in World 5-

In Super Mario Maker and its 3DS port, Spike Traps are classified as block objects. Depending on the game style and theme, Spike Traps can change appearance, most notably in the Super Mario Bros. 3 and Super Mario World game styles, where in the underwater theme, the Spike Trap is replaced by a Jelectro or a Sea Urchin from The Legend of Zelda: Link's Awakening (which in turn is based on the Gordo from the Kirby series, and in this appearance acts more like one due to being invincible), respectively. Additionally, shaking a Spike Trap in the New Super Mario Bros. U ground theme makes a train sound.[5]

In Super Mario Odyssey, the Spike Traps appear once again in their Super Mario 3D World design, where they can be found in Bowser's Kingdom. In one part, Mario must capture Jizo statues to safely move over them.

Unlike other games, spikes are fatal, as simply touching them causes a Yoshi to lose a life. A more common sharp object, a thorn, also appears in the Yoshi's Island series. In the same series, falling into lava or spikes are the only ways Yoshi's death is shown on-screen (not counting when the baby is snatched away); the former shows him spinning and collapsing, while the latter shows him flying off-screen.

Spikes are common indestructible obstacles throughout the Mario vs. Donkey Kong series. Like the other obstacles in the series, they can instantly take out the playable characters. However, enemies are able to stand or walk safely on spikes. In these games, spikes bob up and down slightly, although this is just aesthetic.

Spikes at the bottom and top-right of Level 2-3+ in Mario vs. Donkey Kong

Spikes have a generic appearance in Mario vs. Donkey Kong. They cover pits and platforms, always pointing upward. In some levels, Mario can stand on enemies such as Shy Guys and RamRams and ride them across a bed of spikes to traverse it.

Starting with Mario vs. Donkey Kong 2: March of the Minis, spikes have a red metallic base framing them. In this game and Mario vs. Donkey Kong: Minis March Again!, the sides of these spikes are harmless, but the Minis will attempt to jump over the spikes once they encounter a side and break themselves anyway.

Mario and Donkey Kong: Minis on the Move[edit]

In Mario and Donkey Kong: Minis on the Move, some tiles consist of spike pits. When a Mini reaches the edge of one, it will tip there for a short time. If the player does not modify the Mini's path in time, the toy will fall onto the spikes and cause a Game Over.

In Mario vs. Donkey Kong: Tipping Stars, each row of spikes has two additional smaller spikes on its sides, destroying a Mini instantly upon coming into contact with them. The middle spikes also appear shorter now than in previous appearances.

A Spike Trap appears in Paper Mario: The Thousand-Year Door in Hooktail Castle. When Mario takes the Black Key out of the chest, spikes pop out of the ground to form a maze and the ceiling starts to lower down with spikes. Mario must run out of the spike maze in 50 seconds or he will receive a Game Over.

Spikes also serve as obstacles in some platforming sections, and falling into them will cause Mario to lose 1 HP, go flying off the top of the screen, and land at the start of the section.

Spike Traps appear in Paper Mario: Color Splash. Spike pits appear in levels such as Mustard Café, The Golden Coliseum, and Fortune Island. 8-bit spikes appear in Green Energy Plant. In Kiwano Temple, there are many spikes that resemble Spiny Shells. Some must be crossed by rolling platforms, and others must be flipped over with a POW Block.

Two types of spikes appear in Super Princess Peach. The first type are round, block-sized objects often found in midair or on ceilings. They are usually found on top of areas with blue Donut Blocks to prevent the player from jumping, requiring the use of the Gloom vibe to cross those blocks. They also have a rotation animation, but are otherwise stationary. The other type of spike is a floored variety that also comes in a large size. These ones are thematically decorated to fit each world of the game. When Princess Peach runs into one, she takes half a heart of damage; while invincible, she can move through the airborne type.

“You can use levers to deal with annoying spikes. Hit a lever to trigger or withdraw spikes.”
—Monita, Nintendo Land

Spikes are hazards in the Yoshi's Fruit Cart minigame in Nintendo Land. If the Yoshi Cart touches a spike, the player loses a life. Spikes can be retracted by using a lever. When retracted, the Yoshi Cart can safely walk on them. They first appear in Gate 23.

“This trap can be levered in and out of the ground. The cart may not be able to feel pain, but stepping on one of these will certainly damage it.”
—Monita

Spiked Traps appear in Luigi's Mansion 3, primarily in Castle MacFrights. They will harm Luigi; however, Gooigi can walk through them without getting hurt.