Castle is the castle and final level of World 3 in New Super Mario Bros. Wii. It is unlocked by accessing the Goal Pole of World 3-4 after the ! Switch is activated on the World 3 Map. The level introduces Bob-ombs and Ice Snake Blocks, the latter of which make their only appearance in this level. Lemmy Koopa awaits the players at the end of the level; defeating him allows the players to advance to World 4. 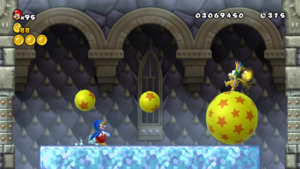 The second fight with Lemmy Koopa

The level starts with ice cubes, several Dry Bones and ? Blocks (one of which contains a Penguin Suit). To progress, Mario and co. must enter a Warp Pipe. When they comes out, they must fall through some Donut Blocks onto an Ice Snake Block, which must be used to progress through the level. Along the way, Mario and co. must avoid large icicles that fall onto the Ice Snake Block and platforms with spikes. There are three circus balls which the players can jump on to reach the first Star Coin. The Ice Snake Block leads to a platform with another Warp Pipe.

After entering the pipe, there is another pipe which continually spawns Bob-ombs. The player must use the Bob-ombs to break ice cubes to access second Star Coin and continue through the level. More Bob-ombs must be used to free another Ice Snake Block. The last Star Coin and a Red Ring are located along the ensuing ride. The Ice Snake Block ends at a pipe leading to a secret area with a Penguin Suit and three circus balls, and a row of bricks, the leftmost of which contains a 1-Up Mushroom. After the pipe and blocks is the door leading to Lemmy Koopa.

Magikoopa makes Lemmy's circus ball bigger so it becomes harder for Mario and co. to hurt Lemmy. As soon as it occurs, the two smaller platforms between the doors lower. Lemmy uses the same tactics as in the tower battle. After being hit twice, Lemmy's ball further increases in size. After the third hit, Lemmy falls and the key to the castle appears. The player then confronts Bowser Jr., who escapes in his airship. The players pursue him into World 4.