Bowser's Castle (World 8-Bowser's Castle) is the tenth and final level of World 8 of New Super Mario Bros. Wii and is the final main level of the game. This level is mostly full of lava and is home to Bowser. It is accessible after the player completes World 8-

. After Bowser is defeated, World 9 is unlocked.

The battle against Bowser. 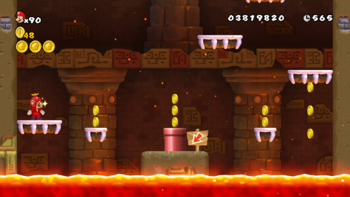 The second room in Bowser's Castle.

For the first (out of two) rooms there are a lot of Lava Bubbles, which will jump out of the lava to attack the player. They can be stopped by an Ice Flower, while the Fire Bars that also appear need to be avoided. The second room has a lot of slow falling platforms and sinking lava, but the platforms fall faster than the lava. In the last room, there is a big green door leading the player to the final battle against Bowser himself. The player needs to make sure to reach the midway point first before Mario enters the final showdown against the Koopa King. On the far right of this room by the door to the final battle, there is a hidden block that contains a Mushroom or a Fire Flower that will help him in the final fight. Then, Mario enters the giant green final door leading to the final battle.

In the corridor after going through the door, Bowser's fireballs will come from offscreen to the right. Once Mario reaches Bowser, the door closes. In the first phase of the final battle, Bowser will breathe fireballs at Mario. Mario must wait for Bowser to jump so he can go under Bowser and hit the switch. Bowser will fall, but the person in the cage whom Mario was expecting to be Peach turns out to be Magikoopa in disguise, unfortunately. Magikoopa will make Bowser grow, but to his astonishment, Bowser grows too much. Super Bowser spits fireballs at the Mario and breaks the walls (or obstacles) while chasing them. He can also stomp to create hazardous lava waves. Mario will be forced to outrun Super Bowser's attacks. Propeller Mushrooms and Fire Flowers can help him in this chase. Eventually, after hopping on several floating platforms, Mario will see a giant orange switch at the end of the room with an exclamation mark on it with Peach in a cage above. Mario hits it, causing the lava to sink, along with Super Bowser. The final victory fanfare is heard and Peach falls down, and they go outside where they see Luigi and the Toads on their Hot Air Balloons. Luigi lets them go and as he is about to enter, the balloon leaves him behind, so the Toads decided to let Luigi enter the other balloon. Then, Peach tells Mario about the secret world, World 9, but if Mario beats the level again, Peach will ask Mario to tell her about his adventure again. After the cutscene, the credits, which are made of breakable bricks, begin.

The Koopalings, Bowser, and Bowser Jr. are about to be crushed by Bowser's castle.

Then, after the credits, Larry Koopa and Bowser Jr. come in and see that Mario and his friends are returning home on their hot-air balloons. Bowser Jr. points Larry to the other six Koopalings, who are pushing Bowser. Then, the castle begins to fall after Bowser is pushed over, crushing Bowser, Bowser Jr. and the Koopalings.