Ghost House is the last Ghost House in New Super Mario Bros. Wii. It is the only one to feature Broozers (which are mostly placed near barrels). Crowbers also appear outside the Ghost House near the end of the level. There is also a hidden goal in this course.

The level begins near a ? Block containing a power-up, along with a Broozer near a barrel. More Broozers are found with barrels as the player climbs the stairs. A barrel is found on a platform near a fake Warp Door. After a group of Broozers at the top of the area, a Warp Door bringing the player to the next area is found. The area contains groups of Boos on either side, along with a Roulette Block. The platform the player stands on disappears after a short amount of time, dropping the player through groups of Boos and Big Boos. The bottom of the area contains multiple Warp Doors, with the correct one being in the top right. The door takes the player to an area with a Big Boo below a rope, along with another door. The door leads the player outside, where Boos and Crowbers are found. Groups of bricks and ? Blocks are also found. At the end of the area, the player reaches the pole.

The hidden goal outside the Ghost House

About midway through the first area, there is a Broozer and a barrel on top of some wood with a crack on it on the left wall. The Broozer should be on the side of the cracked wood and then break some hidden blocks in order to enter a hidden door behind the blocks. 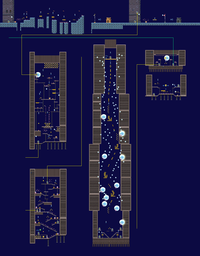