Tower is the Tower of World 8 in New Super Mario Bros. Wii. This tower is the final tower in the game. Upon completion of this level, the player unlocks World 8-4.

Magikoopa is fought at the end, where he uses his magic to make the battle room's platforms move to the left. Magikoopa teleports often while the platforms move. His magic transforms one platform into one or more enemies. Enemies can vary between Koopa Troopas, Koopa Paratroopas, Goombas, Bob-ombs, Monty Moles, Thwomps, Buzzy Beetles, and Spinies. An occasional Super Mushroom may also pop up, as well as coins. 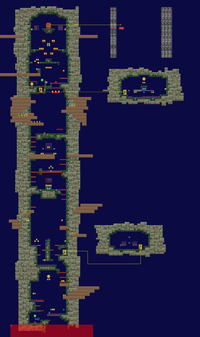