Wonderful World of Wool is the only level of Craft Island in Yoshi's Woolly World and Poochy & Yoshi's Woolly World, and the final level in the game. It is unlocked after all two hundred seventy previous Smiley Flowers of all other levels are collected.

The level begins with many windmills, along with a few Shy Guys, Piranha Plants, and Wild Ptooie Piranhas. It leads to a segment with wavy sand dunes and a few Hot Dogs. The next segment consists of rainbow platforms, along with many Hook Guys and Gusties. The segment after that features a raft with Cheep Cheeps, Lunge Fish, and Stalking Piranha Plants. The following segment features an upwards-moving ice block platform with Bumpties and more Piranha Plants. The next segment features Poochy moving in lava, along with Kamek and some Spinners. The following segment fires Yoshi up and over the Moon, where the segment after that drops Yoshi through a waterfall and back down to the ground, where Poochy awaits. If Yoshi hits a Winged Cloud while riding Poochy, an arrangement of beads unveils to spell "YOSHI". Afterwards, Yoshi and Poochy reach the Goal Ring. 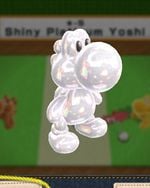 Collecting all of the Wonder Wools knits Shiny Platinum Yoshi back together.