The level starts with several Shy Guys standing below the mobiles. A few Ruffin' Tumbles appear as well, allowing Yoshi to bounce on them to land on top of the lowest mobile. After making it past a few mobiles, some more Ruffin' Tumbles appear, followed by the first checkpoint. Some exclamation circles appear, as well as more Ruffin' Tumbles. This leads to more mobiles, this time with Piranha Plants added. Then there is an edible wall that Yoshi can eat, and using the Ruffin' Tumbles, Yoshi can bounce his way up to the platform. Many Ruffin' Tumble Patches appear here, as well as more edible walls. After using some Spring Balls to further advance, Yoshi reaches the second checkpoint. More complicated mobiles follow, ending with the Goal Ring. 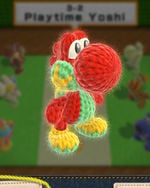 Collecting all of the Wonder Wools knits Playtime Yoshi back together.