A-Mazing Post Pounding is the sixth level of World 3 in Yoshi's Woolly World.

The level opens with a pitfall with one Fang at the top. After the pitfall, Yoshi must ground pound the posts blocking the door, then enter the door. Yoshi enters a room with many posts. Yoshi should pound either the yellow post or the purple post to continue to the next room, then trigger the secret Winged Cloud to touch the first checkpoint. Afterwards, Yoshi must use the spring-like posts to advance directly to the second checkpoint. Afterwards, Yoshi must hit a hidden Winged Cloud by flutter jumping to the left of the ledge, revealing a platform to an edible wall. Eating this wall and activating the trampoline-like post will send Yoshi to another part of the maze, where Yoshi can repass the first checkpoint. Afterwards, Yoshi should return to the ledge containing the second checkpoint, where a Present Box containing a key awaits. Yoshi must then pound the nearby pink post and eat the edible wall to enter the Whirly Gate, transforming him into Mole Yoshi. After the transformation segment, Yoshi must go to the left, then pound the post to spring up and open the locked door. Yoshi must then pound the last post to leave the area and get to the Goal Ring. 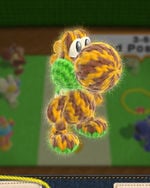 Collecting all of the Wonder Wools knits Pound Post Yoshi back together.

During the level there is a Whirly Gate segment featuring Mole Yoshi. This segment, when completed, cannot be reentered.