Fluffy Snow, Here We Go! is the first level of World 5 in Yoshi's Woolly World.

The level begins with a snowball and many Tap-Taps, leading to an area with a Wild Ptooie Piranha, a Piranha Plant, and more Tap-Taps. As Yoshi rolls the snowball even further, he will encounter more Piranha Plants, until it is impossible to move the snowball further. Yoshi will then approach a segment where he must use a Flooff to melt the Ice Blocks, then go past the first checkpoint. After taking the Warp Pipe, Yoshi will end up in a cave with many Ice Blocks, followed by an area with several Flooff-spitting Warp Pipes leading to the second checkpoint. Another Warp Pipe follows, along with a giant snowball chase that leads directly to the Goal Ring. 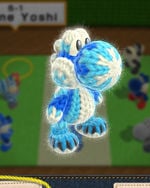 Collecting all of the Wonder Wools knits Alpine Yoshi back together.

This level has a Whirly Gate that can be accessed through the second green Warp Pipe after the first checkpoint. It turns Yoshi into Moto Yoshi and can be reentered.