Rollin' Down the River

Not to be confused with Rolling Down the River.

Rollin' Down the River is the third level of World 4 in Yoshi's Woolly World. The level is set in an environment resembling an autumnal forest. Yoshi has to trek along a river littered with Lunge Fish.

The level begins with a platform with a Lunge Fish below it. Several Woozy Guys follow, along with a Paddle Platform and a few platform outlines, along with more Lunge Fish. After another group of Woozy Guys, more Paddle Platforms follow, along with more Lunge Fish. The first checkpoint immediately follows, along with a Whirly Gate leading to a Mermaid Yoshi segment. This leads to the second checkpoint, which in turn leads Yoshi to a raft. The raft will cross several leaping Cheep Cheeps and a few Ukikis, as well as a few Piranha Plants. Afterwards, several more Lunge Fish and Woozy Guys will appear, along with a waterfall. Several Ukikis appear, as well as a few more Piranha Plants and Lunge Fish. Not too long after, the second waterfall appears, and the raft begins to break off to the point where only the part of the raft with the flag remains. After yet another Lunge Fish, the raft will approach one final waterfall leading directly to the Goal Ring. 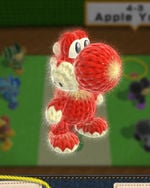 Collecting all of the Wonder Wools knits Apple Yoshi back together.

Between the first and second checkpoints, there is a Mermaid Yoshi segment that, when completed, cannot be reentered.