Snag-Stitch Mountain is the second level of World 6 in Yoshi's Woolly World. 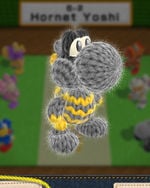 Collecting all of the Wonder Wools knits Hornet Yoshi back together.

A Transformation Door can be found by filling in a warp pipe outline just above the third Snag-Stitch and entering. It turns Yoshi into Umbrella Yoshi.