Spooky Scraps! Don't Get Spooked! is the sixth level of World 4 in Yoshi's Woolly World and Poochy & Yoshi's Woolly World. Its main mechanic is scraps of fabric with light shone through them, revealing silhouettes of Yoshi, enemies, and items behind them.

The level begins by introducing a scrap that moves back and forth, revealing platforms and beads. The second scrap obscures a Winged Cloud and passes through two Boo Guys, revealing that it also turns enemies invincible. Following this, two scraps appear above a bottomless pit, requiring the player to use the platforms revealed by the scraps to progress. The next section features a Yarn Basket and introduces a Wik, alongside more scraps above pits and a Winged Cloud which can only be hit from the side with a yarn ball. A door is at the end of this section, which leads to the first checkpoint.

Following the checkpoint is a long section featuring many scraps and several Wiks, with no floor other than the platforms revealed by the scraps. A blue rope appears after the first Yarn Basket in this section; climbing it leads to a room with several beads. A red rope appears after the blue rope; however, climbing this rope causes six Boo Guys to appear. After these ropes, the player must swing across two green ropes to reach a section with two scraps that move quickly and two more red ropes. Climbing the rope on the left and standing above the door reveals four groups of beads, while climbing the rope on the right provides access to a door leading to a secret area. This area features a scrap that moves vertically and a Smiley Flower. After these two red ropes, an additional gap in the ceiling can be found, which contains an invisible Winged Cloud below it. Hitting this Winged Cloud reveals a blue rope, which leads to a room with two Boo Guys and another Winged Cloud containing a key. At the end of this section, entering the unlocked door sends the player back to a door earlier in the section, while using the key to open the locked door leads to the second checkpoint.

Following the second checkpoint is a section featuring two scraps that continuously move to the right, as well as Boo Guys and Wiks. The scrap on the right moves offscreen, then to the left of the other scrap. The player must stay close to the scraps to use the platforms revealed by them, as no other floor is present except for a row of blocks in the middle of the section. A door appears at the end of this section; however, standing below the gap in the ceiling reveals another invisible Winged Cloud, which reveals a blue rope upon being hit. Climbing this rope leads to a secret door which allows the player to collect a Smiley Flower in the final room, which is immediately followed by the Goal Ring. 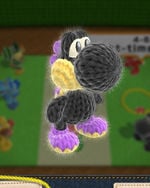 Collecting all of the Wonder Wools knits Nighttime Yoshi back together.