Perils of the Perplexing Pyramid

The level starts with a night scene, leading into a pyramid with a few Shy Guys. After a cannon launch, Yoshi must eat and spit out a Koopa Shell to be moved to a platform above with a red ! Switch. After moving across the blocks, Yoshi must then catch the shell before it careens off to an unreachable point, then spit it out again before the red ! Switch wears off to hit a yellow ! Switch. This reveals a key, which allows Yoshi to access the locked door. The second room, if backtracked from the access point, starts with a Tap-Tap spawning area. Yoshi must get it across the hole until it hits another red ! Switch. Yoshi must then quickly guide it across again to yet another red ! Switch, followed by another, until it finally reaches a yellow ! Switch, revealing the key and allowing access to the next room. The third room consists of a Monty Mole spawning area. Yoshi must guide the Monty Mole across many lifts to yet another yellow ! Switch, leading to another door. The fourth room at first consists of a coffin with a single Pharaoh Guy coming out of a lift. A nearby flame must be eaten and spit out at it to defeat it for good. After this, a cannon will spawn, sending Yoshi out of the pyramid and back into the open. The Goal Ring awaits. 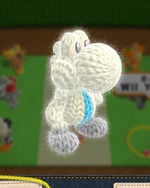 Collecting all of the Wonder Wools knits Wii Yoshi back together.