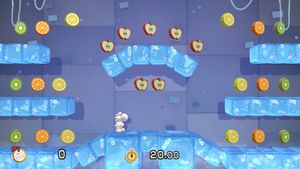 One of the Bonus Game stages

The Bonus Game is a minigame in Yoshi's Woolly World. It can be accessed by getting a Smiley Flower in the Goal Ring. In the minigame, Yoshi must collect fruit within the time limit of 12 to 20 seconds. The fruit consist of apple, kiwi, lemon, and orange slices. Each fruit slice is worth 50 points. There are two methods to collect the fruits: by body and by tongue. If all of the fruit has been collected, the stage will regenerate more fruit, and Yoshi will earn extra time. Partway through a game, a watermelon slice will appear, which is worth 300 points. When time runs out, the total score Yoshi has accumulated will be converted into beads. There are many variations of this bonus game: