King Bowser's Castle is the eighth level of World 6 in Yoshi's Woolly World, and, by extension, the final compulsory level of the game.

The level begins with Skeleton Goonies and a cannon leading to Bowser's Castle. A segment containing Fangs and Tap-Taps follows, leading to a door. This, in turn, leads to a four statues where Yoshi must find the correct color yarn for each, with the both checkpoints on either side and it has a few Hook Guys. Yoshi must first go to the left, and enter a segment with Black Shy Guys. He must then head up the stairs, past some Fly Guys (where the Moon is visible again) to an area with eight fast-moving Fly Guys. The next segment consists of more Shy Guys, as well as some Bomb Guys. The segment below it consists of water and a fast-moving yarn ball pendulum. Yoshi must hit an ! Switch at the top left of the segment and make his way to a blue warp pipe, then head left to a more secret area where he can find blue Shy Guys. Yoshi must then head back to the statues and fill them in with the appropriate colors, causing a larger statue to reveal a door. Kamek will then try to ambush Yoshi in a similar fashion to previous Yoshi levels. This leads to the boss door. 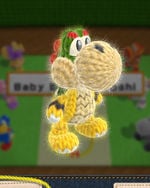 Collecting all of the Wonder Wools knits Baby Bowser Yoshi back together.