When Yoshi starts the level, he is in an outdoor fortress area with a huge moon, hills and skinny trees in the background. He then needs to cross a long gap as the Helicopter. Along the way, Yoshi must avoid the Skeleton Goonies; crashing into them causes him to fall (usually leading to losing a life). Kamek also occasionally flies in during this time, trying to knock Yoshi out of the sky. If Yoshi makes it to the Yoshi Block, which is followed by a Middle Ring, Kamek will fly in for the last time in the area and look at Yoshi grimly, but in the GBA version, he simply flies away.

The hallway inside the castle consists of four areas to choose from (doors on a roulette wheel). Four doors which are numbered 1, 2, 3, and 4 spin on the wheel, and Yoshi must hit one with an egg, which will then drop to the floor and allow him to progress.

Door 2 includes nearly every Shy-Guy species, and at the end of that area is a door containing a Slime, who holds the key to another door that leads to the final room.

Door 4 consists mostly of moving platforms that hold Coins (being a coin path where the player can get a lot of extra lives). All Red Coins and Special Flowers are in plain sight. The only possible threats are a few Gusties that fly through the stage and two Fly Guys at the end who carry 1-Ups. 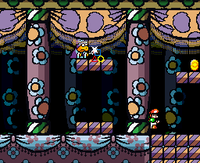 All four areas lead to the final room, where the "Room Before Boss" music plays. The final room before the boss battle is an autoscrolling playroom. Kamek appears here and attempts to attack Yoshi with his magic wand. If Kamek hits any of the blocks in the level, they will turn into a Fang, a Milde, a Shy-Guy, or a Star. If Yoshi makes it past Kamek's final shots, he will be awarded with a Middle Ring and a huge door that leads to Baby Bowser's room.

Kamek greets Yoshi, demanding he hand over Baby Mario. Soon, however, Baby Bowser awakens, aggravated that Kamek "woke" him. He then repeatedly Ground Pounds Kamek and kicks him aside, before noticing Yoshi and acknowledging him as a "gween donkey". He attacks Yoshi, trying to push Baby Mario off and ride Yoshi. Yoshi must dodge Baby Bowser's Ground Pounds and Ground Pound the floor himself, creating a shockwave that can damage the young Koopa King. 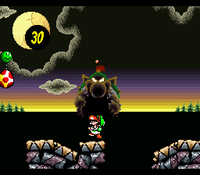 Yoshi and the gigantic Baby Bowser are seen here fighting.

Once Baby Bowser is defeated after three hits, Kamek returns, fully healed from his beating, and puts his magic to full power. Yoshi then finds himself in the now-destroyed room, and Big Baby Bowser (healed from Kamek's spells) appears in the background. Yoshi must nab red Giant Eggs from the Baron von Zeppelins that fly in, while avoiding falling rocks that destroy the stadium, fireball blasts from Big Baby Bowser, and Big Baby Bowser charging at Yoshi head on. If Yoshi hits him seven times, Baby Bowser is returned to his normal self, and Kamek flies off with him. Then, Yoshi jumps up to a small area where the stork and Baby Luigi are kidnapped. After that, a message says:

Thus, due to the marvelous team work of the Yoshi clan, the twins are reunited.

The captured stork is freed by Yoshi, and sets about his duty and finally makes the long awaited delivery!

Thank you, Yoshi! The twins will meet the parents soon!

The Stork can then make his delivery to Baby Mario and Luigi's mother and father, and the credits roll. The game ends with an image of Baby Mario and Luigi being held by their parents, with text reading “The End” below. The screen freezes on the image once the music finishes and the system will need to be turned off or reset. The same thing applies with the GBA version unlike the other Super Mario Advance installments, although the game will still save after the ending.