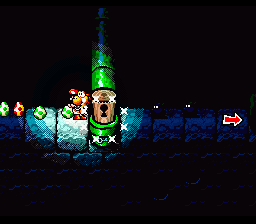 Yellow Yoshi opening the locked cork pipe. The cork is about to pop out of the pipe and fly off.

The key turns out to be guarded by a Slime on the lower first floor of the maze on the left side. Once Yoshi defeats the Slime (which requires all of his eggs), he can take the key and travel back up to the pipe and venture on.

Yoshi will then find himself on two obstacle courses over lava, which he must cross using first a wheel of spinning platforms, then a small log. Finally after the final Middle Ring, Yellow Yoshi enters the Warp Pipe to the battle of the fort.

Kamek will scream at Yellow Yoshi for making so much progress and "resize" a Tap-Tap.

While Tap-Tap the Red Nose is jumping around the arena, Yoshi will notice that the bridge over the lava is made of unstable blocks. He then pelts them with Yoshi eggs until a gap appears. Yoshi waits for Red Nose to jump at him, only to fall into the gap in the bridge. Yoshi then progresses onto the last four levels of the game.