The Cave Of The Mystery Maze 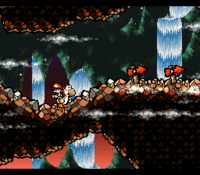 Inside the Cave Of The Mystery Maze 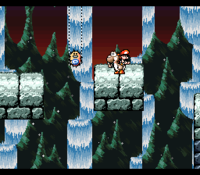 The third area of the stage

The player starts off in a small field with two Yellow Eggs near them and some dirt that can be Ground Pounded through. A small way down the dirt is an opening that has two Mufti Guys and two Red Coins. A little further down is another opening with more Mufti Guys, Red Coins and a Special Flower. A little further down from this are some Arrow Clouds, which can give an extra life and a Spring Ball that leads to a Winged Cloud. Further down from this is an opening that has an Egg Block, and to the right of it is an opening with a Lantern Ghost and a Winged Cloud with a door, a key can also be found at the bottom of the area. The door leads into a cave area.

The next room contains only a Middle Ring. In the room after this, are several platforms as well as some Cloud Drops and Cactus Jacks. At the end of the room is a Spring Ball that leads to the next area. In this final area are several Countdown Platforms and Spray Fish that lead to the Goal Ring.