Lakitu's Wall is the seventh level in the second world of Super Mario World 2: Yoshi's Island and Yoshi's Island: Super Mario Advance 3. The level features Fat Guys, Mildes and Wall Lakitus, as well as both the Yoshi Car and Helicopter transformations. This level's playable Yoshi is the red Yoshi. 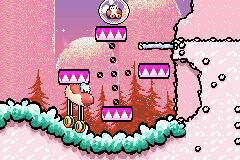 The Car approaches another morph bubble.

The player starts off in a field next to a Fat Guy, some Mildes, a Yellow Egg, and a Red Egg. The Fat Guy can be used as a platform to reach an area above, where there is a Special Flower, some Red Coins and a door that leads to a minigame; the key that unlocks it is found to the left of the door.

After this section are some dirt blocks with Mildes in them; one of the dirt blocks has an ! Switch in it that makes coins appear in the other one. At the end of this section are two Turtle Cannons, the Middle Ring and the door to the next area. Here, some Fat Guys, Mildes and Tap-Taps can be found, with the end of the room being marked by a Tap-Tap that is in front of a Special Flower and a door. The door leads back to the area with the Bullet Bills, and is next to a Warp Pipe that leads to the next area. In this area are several falling stone blocks that lead to the Warp Pipe at the end.

The area within the Warp Pipe contains some Shy-Guys and an Eggo-Dil. At the end of this small section is a Spring Ball that leads to a higher up platform, that has stairs on the other end of it that lead down the platform. Above this section are some clouds that lead to an ! Switch that leads to a secret area; in the secret area are several dirt pits, with the third dirt pit from the right containing a Special Flower. After this is an area with several Wall Lakitus and the entrance to the next room.