Not to be confused with Burt the Bashful's Castle.

As the level begins, Yellow Yoshi finds himself at the beginning of the fort. Near the beginning, there are a few yellow Egg Blocks Yoshi may hit to collect yellow eggs from. He may then hit a few buckets for several coins. Certain walls in this area without blocks in front of them may fall onto Yoshi, damaging him and giving him little time to rescue Baby Mario if he is hit.

Immediately following this, there are Boo Guys operating spike traps. There is then a Spring Ball Yoshi must use to reach a higher platform. There are visible cracks in one part of the ceiling Yoshi may hit to create an opening. Jumping through it and heading left simply takes Yoshi back to the beginning, while heading right allows Yoshi to bypass certain obstacles (as well as items) due to there being other soft spots in the ceiling Yoshi may Ground Pound through. Below this are two Burts in a small area with a lift and a Special Flower. There is another Special Flower just to the right, though Yoshi must avoid another sudden falling wall to collect it. Just after this is another pair of Burts and an Egg Block. There is then a lava section, where Yoshi must use the horizontal lifts to make it across a long pit of lava to reach a Middle Ring and a Warp Pipe leading to the next area. 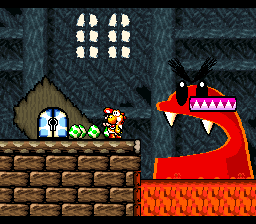 The lone Gargantua Blargg is encountered

The section Yoshi finds himself in is similar to the beginning of the level, featuring both a falling wall and a spike contraption operated by a pair of Boo Guys. There is an Egg Block between two Winged Clouds. The one on the left contains Stars, while the one on the right activates a bridge across the pool of lava when hit. After this is another pit of lava with a seesaw tilting slowly. There is a Special Flower close to the lava Yoshi may collect if he can avoid the Red Blargg in the lava. However, there is another Special Flower Yoshi may collect by tilting the seesaw all the way to the right, then jumping on the left side to find the flower on a higher ledge.

Proceeding to the right, there is a circle of moving platforms with a Red Blargg in a pit of lava below. Next up is a pipe dispensing Shy-Guys and a locked door. After this is another lava section, in which Yoshi must traverse several vertical lifts and a Gargantua Blargg. On the other side of the pit is an Egg Block and a vase. Yoshi must break the vase to reveal a key. Yoshi must collect the key and return to the locked door to continue. 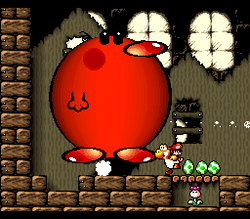 Burt the Bashful is defeated

Beyond the locked door is a room with a few doors and Burts, as well as an Egg Block. The door in the middle of this room takes Yoshi to a small room with four Wild Piranhas. A Smiley Flower appears in one of the corners when all of them are defeated. After this, Yoshi may touch a Middle Ring and hit a Winged Cloud for Stars before entering the door to the boss room.

When Yoshi drops into the boss room, a Burt hops toward him. Kamek flies in and uses his magic to enlarge the Burt, turning him into Burt the Bashful, who attacks by simply hopping around the room, damaging Yoshi if touched. To defeat him, Yoshi must throw eggs at him, causing him to become faster. After he is hit six times, Burt the Bashful is defeated as his pants fall off completely. He becomes red and bounces around the screen, decreasing in size before disappearing, this completing the level.