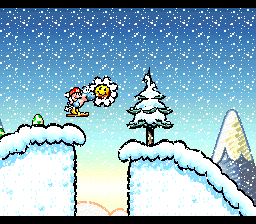 Danger - Icy Conditions Ahead is the third level of World 5 from the game Super Mario World 2: Yoshi's Island and Yoshi's Island: Super Mario Advance 3. This level is made up of lots of snow and ice - the ice often makes it difficult for Yoshi to keep its footing. This level's playable Yoshi is the light-blue Yoshi.

The level begins with the Light Blue Yoshi in a snow and ice-covered area. To break the ice which deprives Yoshi of certain objects and items, the player must consume a red watermelon, which, when sprayed, melts the ice. Throughout the first area, Yoshi encounters Bumpties, Spray Fish, Flopsy Fish and Wild Piranhas each taking it in turn to halt Baby Mario and Yoshi's progress, whilst the dinosaur navigates its way through various bodies of water, requiring the use of buckets at certain points. Often there are enemies of Yoshi embedded in the ice as it travels through the stage. The next area is once again covered in ice and snow. There, with the use of the red watermelon again, Yoshi can pass through a Middle Ring and gain a Special Flower before a Super Star enables Baby Mario to turn into Superstar Mario. Whilst in this state, Mario must barge his way through a number of Bumpties, either to a door which, when entered, encounters Yoshi with many Dr. Freezegoods, ski lifts and Bumpties, or to an area at the end of the area by which Yoshi can morph into a helicopter and collect many coins. Either way, the area with the ski lifts is still accessed. The third and final part of the level takes place at night, and Yoshi is forced to ski down a large icy mountain, while avoiding many obstacles, including large rocks and Goonies flying across the screen. With close attention, fellow enemies can be seen embedded in ice.

This is an icy stage. Be careful! It's slippery and difficult to walk. Grab a red watermelon and you can breathe fire three times. Use it to melt the ice or attack your enemies.