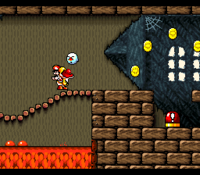 The player starts off in a room with a Boo Buddy and an ! Switch on their right, which needs to be activated so a lava pit can be crossed. At the end of this segment is a door that leads to the next room. 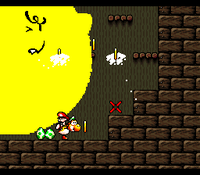 In the next area is a Winged Cloud and another door, if the door is entered, the player will need to defeat to Big Boos which will cause a Special Flower to appear. If the Winged Cloud is hit with an egg it will cause a bridge to appear, cutting off the middle section of the room, that will lead to the top of the room, where there are several Gusties, which leads to a small platform with an ! Switch on it, this needs to hit so a path to a Winged Cloud containing a Key will appear. The Key can be used to open a door at the start of the room. In this room are several Boo Buddies and Big Boos, as well as some Red Coins and a Special Flower, at the end of the room is a Warp Pipe that leads to a small platform in the room before it. On this platform is a crate that contains some Stars. Due to going into a different room, the player can now use a Flatbed Ferry and get to the middle section of the room, that had previously been cut off by the stairs, and get to the Middle Ring as well as the path to the next area.

In the next area, are some rising stones and Fire-Bars, after this small segment is a post which is then ridden across lava to a Warp Pipe that goes to the next area.

In the next room, are several Boo Buddies, Big Boos, eggs, and the door to the next area. Near the end of this room is a destructible ceiling part that leads to a secret area. In this secret area are several Blue Boos, a Boo Man Bluff, a Warp Pipe that spawns Boo Guys, and a Special Flower.

The next room contains several platforms that lead to the Boss Door. The boss of this fort is Bigger Boo who is defeated by the player rebounding eggs off the wall and hitting him when their backs are turned. 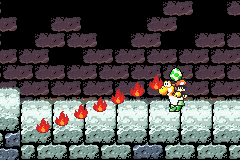