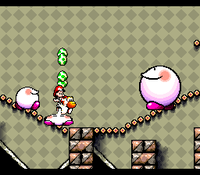 The beginning of this stage takes place in a grassed area outside of the fort. It has Incoming Chomps and Shark Chomps swarming around.

When Yellow Yoshi enters the fort, he will find four doors to choose from. The first door contains plenty of lava and Hot Lips. Yoshi must navigate an area filled to the brim with lava, and receives a key at the end of the area. The second area is a room filled with Bandits, Snifits, Bullet Bills, and a lone Coin Bandit. If Yoshi can navigate this room without getting Baby Mario stolen, he will receive a key. The third area has lots of thorns and Grunts, as well as a few Snifits. It also has blue spinning wheels. Yoshi gets a key at the end of the area. The fourth area has every plant-based enemy in the game guarding the last key. If Yoshi can defeat them all, he will receive the last key.

Using the four keys, Yoshi can open the locked door in the center hub area, and the three locked doors that follow it. The first room is filled with Mildes. The second one is filled with other enemies in the floor and ceiling. The third one is filled with lava and some red coins along with a tilting platform as a bridge. The last room features more Mildes. It also has the entrance to Marching Milde's chamber where Yoshi must battle and defeat her.

Like a regular Milde, Marching Milde does not attack, instead simply walking left and right inside her large chamber, hurting Yoshi if he touches her from any other side than from above. As is the case with Puchipuchi L, jumping on Marching Milde simply causes the Yoshi to bounce off without doing any damage. To defeat this boss, the player must instead Ground Pound on top of Marching Milde to make her split apart into two smaller versions of herself, which are large versions of Puchipuchi L. Employing the same strategy against the large Puchipuchi L makes them split into regular-sized Puchipuchi L, which in turn split into Mildes upon being Ground Pounded. Once every Milde has been destroyed or eaten, the boss is defeated.