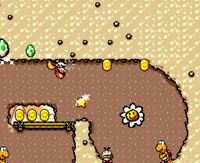 GO! GO! MARIO!! (or Go! Go! Mario!! in the British English version) is the first level of the fourth world of the games Super Mario World 2: Yoshi's Island and Yoshi's Island: Super Mario Advance 3. This level takes place in some hills, with large mountains in the background. The level features Goombas, in their only appearance in the game. It is the second level to feature Fuzzies, and it also features Flying Wigglers. At the end of the level, Baby Mario must take a Super Star to pass through some paths until the level exit. This level's playable Yoshi is the green Yoshi.

First, Yoshi starts out in an area with a Koopa Troopa and some Goombas, with some mountains in the background. After that, there is a section with some Warp Pipes, and in one of the Warp Pipes, there is a Wild Piranha. After climbing up some slopes, Yoshi reaches an area with more Goombas and Para-Koopas flying in the air. There is also a Special Flower that can be found in the middle of two hills. After that, there are many slopes with coins and Red Coins, more Koopa Troopas, and another Piranha Plant.

Next, Yoshi is blocked by two Wild Piranhas in pipes, both of which must be defeated. This leads to a section with many pipes, enemies and a Winged Cloud, which will release some Stars when hit. After that, there is a Wild Ptooie Piranha that is spitting out Needlenoses. Next to the enemy is a Warp Pipe that takes Yoshi to an underground cave with crystals in the background. The cave contains many coins, some platforms and a small box at the end that releases some Stars. After that, Yoshi can use another Warp Pipe to return to the level. In the middle of the two pipes, there is a Tulip.

At the next section of the level, there are some Shy-Guys, Fly Guys, and a Whirly Fly Guy. If Yoshi goes downward, he will find some Bullet Bills being fired out of cannons, and at the left, there is a Winged Cloud that releases a blue watermelon and a Special Flower in a hole. To the right, there is a section with many Bullet Bills, Koopa Troopas and Para-Koopas. At the end of the section, Yoshi can enter a Warp Pipe, which leads him to the next area of the level.

The Warp Pipe leads to the final section of the level, which contains many platforms and a Super Star that is blocked by a wall. Yoshi can hit the blocks with his eggs, which will release the Super Star. After Baby Mario collects the Super Star, he must run through a maze-like hill section with Koopa Troopas, Stars and Red Coins. There is a small area with a Special Flower that is found at the right. At the end of the section, Baby Mario must glide in the sky in a section with Flying Wigglers. There are also many coins and a Special Flower in the sky. After that, Yoshi can take Baby Mario to the Goal Ring.