What's Gusty Taste Like? is a level in Super Mario World 2: Yoshi's Island and Yoshi's Island: Super Mario Advance 3. The level is inside a cave, but starts at a forest of Gusties. Inside the cave there are no Gusties but there are some cave enemies such as Fangs and Lantern Ghosts. It also has a few Mildes around, as well as Flightless Goonies. This level's playable Yoshi is the light-blue Yoshi.

The player starts off in a forest area, where Gusties soon appear. There are also some dirt patches nearby, the last one contains a Winged Cloud that if hit releases an ! Switch that causes some coins to appear. This area is fairly short, and at the end of it is a Warp Pipe that leads to the next area. 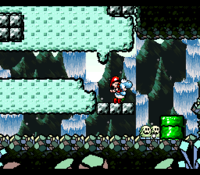 At the start of the next area is the Middle Ring, and a Warp Pipe that will spawn Lantern Ghosts. Next to this are several dirt patches that need to be destroyed by eggs. After this section, is a downhill section, and at the bottom of it is a Super Star. During this section is a Chomp Rock which if jumped on leads to a locked Door which leads to a minigame. At the end of the Superstar Mario segment, on the left, is a large dirt patch that contains a Special Flower and an ! Switch, which if hit leads to a secret area. In the secret area are two Yellow Eggs and a Red Egg, as well as several Red Coins and Submarine Nep-Enut. To the right is a dirt segment and at the end is a Winged Cloud, that contains a morph bubble which will transform Light Blue Yoshi into the Mole Tank and allow him to get the Key to the minigame door. At the end of that segment is a Spring Ball that leads to the top of the cave, where there is a Chomp Rock which can be used to get to the Goal Ring.