Salvo The Slime's Castle is the eighth and last required level to access World 2 in Super Mario World 2: Yoshi's Island and Yoshi's Island: Super Mario Advance 3. It also introduces Lemon Drops, Spray Fish, and Bandits (as enemies). It also features several never-seen-before challenges, such as spiked platforms that can be turned around. This level's playable Yoshi is the blue Yoshi. 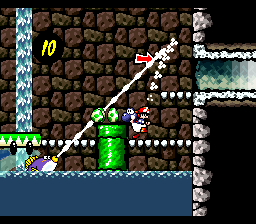 The Spray Fish can spray Yoshi with water to push him back.

The player starts off in a room with several platforms that spin if stood on, a paddle wheel and some Lava Bubbles. The final spinning platform can be used to get to another part of the room that has Red Coins and a Special Flower. At the end of the room is a Warp Pipe.

In the next room, there is a Spray Fish and a liquid lift that leads to two rooms, the room on the left contains another Special Flower and the room on the right contains Red Coins, a Winged Cloud and the Middle Ring. At the bottom is a Warp Pipe that spawns Shy-Guys and the entrance to the next room. In the Game Boy Advance remake, there is another room that only contains the Warp Pipe for Shy-Guys to spawn.

In the next room there is an spinning wheel that leads straight to a Middle Ring and the boss door.

To defeat Salvo, Yoshi must throw eggs at him which makes him gradually decrease in size by losing small Lemon Drops from his body. Yoshi can either eat or throw an egg at the Lemon Drops for them to be defeated. In order for Yoshi to get more eggs, he must eat the Lemon Drops left behind by Salvo. As Salvo gets smaller and smaller, he becomes faster and bounce higher, until finally becoming so small he implodes. After that, Salvo leaves a key behind, used to access World 2. To attack Salvo will bounce in Yoshi's direction and will try to push him into the pit of lava at the end of the room.