Sunset at Curtain Falls is the fifth level of World 4 in Yoshi's Woolly World.

The level begins with a cannon to a curtain. The curtain begins automatically moving, and Yoshi will cross many hordes of Gusties before getting onto another curtain with an Ukiki on it, followed by another curtain with three Ukikis on it. Following that is a pair of Fangs with a curtain directly above which Yoshi must get onto. It leads to two trampolines, which in turn lead to the first checkpoint and another curtain. This curtain leads to yet another, leading to an underground segment with Fangs. After traversing a few curtains, Yoshi is led back out into the open. A zigzag of movement between curtains follows, which then leads to a fast looping curtain, which in turn leads to a downwards-sloping curtain that leads directly to the Goal Ring. Yoshi will need to jump off the curtain onto the ground to be able to reach the Goal Ring. 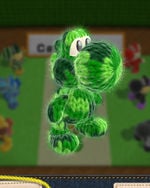 Collecting all of the Wonder Wools knits Camo Yoshi back together.