Fluffin' Puffin Babysitting is the fifth level of World 3 in Yoshi's Woolly World.

Immediately upon the start of the level, a Fluffin' Puffin parent appears along with the chicks. After throwing two chicks, another family appears, followed by a third. After a fourth, a Koopa Paratroopa and a Piranha Plant appear, followed by a more vertical segment and more Piranha Plants. The first checkpoint appears afterwards, along with more Fluffin' Puffin families and more Piranha Plants. Wild Ptooie Piranhas begin appearing and shooting Pokey Poms. After a while, the second checkpoint appears. After a diagonal segment featuring many Koopa Paratroopas, the Goal Ring awaits. 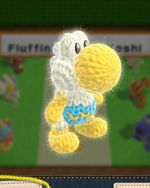 Collecting all of the Wonder Wools knits Fluffin' Puffin Yoshi back together.