Feel Fuzzy, Get Clingy is the sixth level of World 6 in Yoshi's Woolly World. It features conveyor belts made of Velcro that Yoshi can cling to. The conveyors can be used to ride up walls or secure yarn balls, but can also carry Yoshi into spikes and others enemies. The name of the level may be based on the Super Mario World 2: Yoshi's Island level Touch Fuzzy, Get Dizzy. 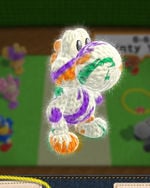 Collecting all of the Wonder Wools knits Painty Yoshi back together.