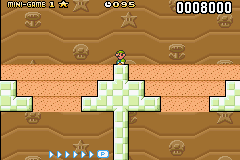 The Blue Mushroom House[1] is a blue-colored Toad House that contains one of the special minigames found in World-e in Super Mario Advance 4: Super Mario Bros. 3. The Toad House is unlocked after the player collects 30 Advance Coins. The player must pay 30 coins each time they play this minigame. Until in the release of the Virtual Console version of the game, the Blue Mushroom House was also the only Mushroom House that could be made accessible by the player, largely due to the premature cancellation of the e-Reader line outside Japan.

With a 100-second time limit, Mario (or Luigi) starts the minigame in a cave atop two sections of soft sand (first seen in Super Mario Bros. 2). Mario must choose one of them and dig until he falls to another level. There are more sections from which to choose (two for each previous section). Digging once more, Mario falls to a small area divided into four areas. One of them contains a treasure box, while the others are empty. If the player digs to the box, they will get a random item, but they will lose if they reach an empty dead end.